Our local small arms expert Raoul Kunz offers his insights on yet another useful weapons set: 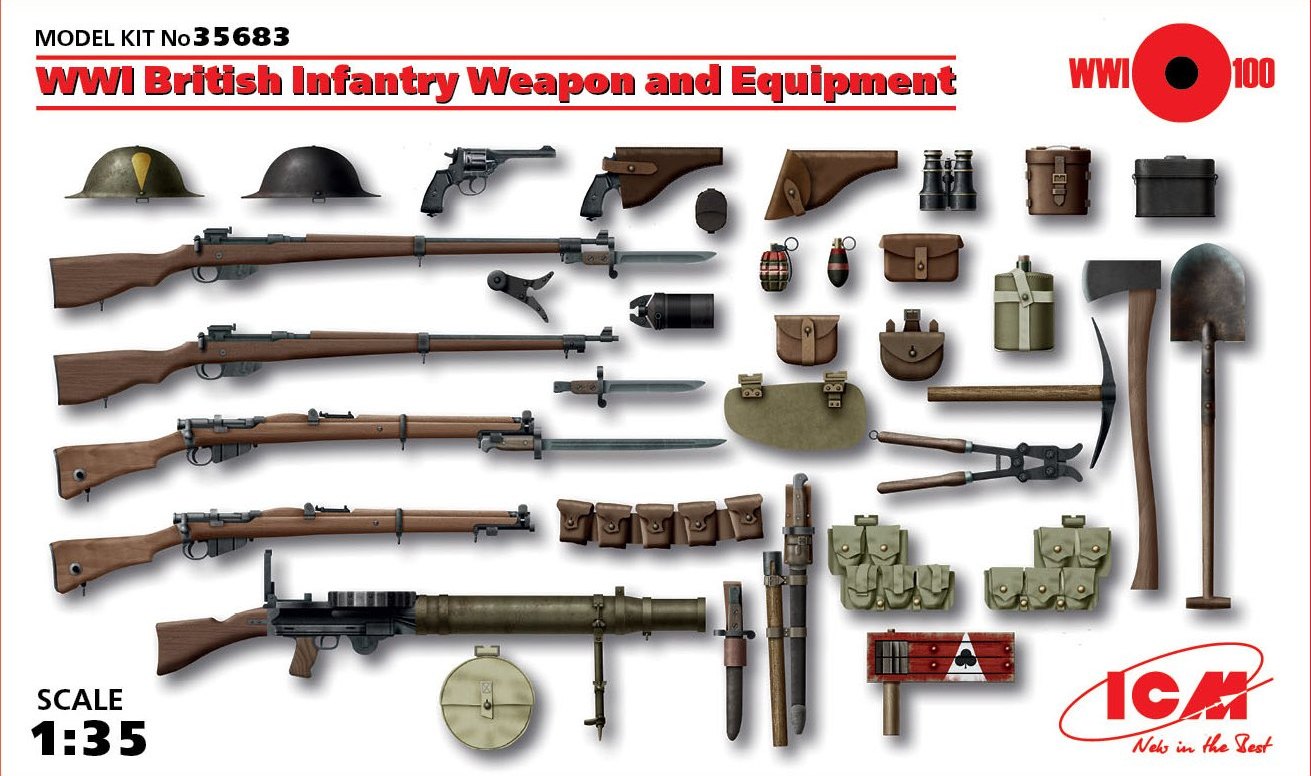 This set also comes to me through the veritable trench assault set by Master Box (of which I will eventually write a review without having to go through the various weapons).
Once more I’ll go through the content list and comment on the items I feel need a comment for reasons of conception, moulding or history.

This set contains once again a magnificent collection and, as mentioned in the beginning, a couple of guns from the arsenal of Canada as well as the British items.
By now it’s probably somewhat redundant but it’s a beautifully sculpted and moulded set- as are all ICM sets of the past ~10 years really.

=>
2x Lewis guns – a proper light machine gun designed by American colonel I.N. lewis but nor adopted by the US army for personal reasons. adopted by the British after Lewis had moved his production to Belgium and later relocated to the UK just before outbreak of war in ’14. Used primarily by British and Empire formations it was adapted for aircraft use and stayed in service in one form or the other until the Korean War of ’50-’53. Another classic with wide possible use far beyond the British Great War setting. Comes with a bi-pod both collapsed and deployed as well as a separate magazine.

. Comes with a separate tangent sight. Definitely is the Mk III and not the Mk III* because while the magazine cut off that was deleted in the Mk III* would be invisible, it lacks the side mounted volley sight on the left side of the rifle.

6x Lee-Enfield No 1 Mk III rifle with bayonet – again, the SMLE No 1 Mk III of 1907 with the item that made caused the designation: the rather wicked looking P’07 sword bayonet, beautify moulded here.

2x Ross Mk III 1910 rifle – Canada’s Ross Mk III rifle of 1910 – came into existence in 1903 because the Dominion of Canada was denied a licensed production of the Lee Enfield and thus went ahead and had it’s own straight pull bolt action rifle in .303 developed. It was a supremely accurate target rifle to be sure but…problematic under field conditions. E.g. the bayonet was prone to fall off if the rifle was fired with it fixed and the bolt assembly was prone to blow into the shooters face if incorrectly reassembled…

6x Lee Enfield scabbard with pickaxe handle – exactly what it says in the designator.

6x Lee Enfield Pouch (left) – together with the other side it’s the substantially and surprisingly useful 5-pouch containing 50 rounds.

2x Rifle Mortar – the 2.5” cup grenade discharger M1917 to be affixed to the SMLE without bayonet…however… when used with a designated SMLE, the rifle in question usually was strengthened with a wire wrapping.

2x Webley Scott Mk IV revolver – While the official service revolver at the outbreak of the war was the Mk V of 1913 the Mk V was still only available in insufficient numbers and the Mk IV was still the most common revolver in service. Though the regular infantry size Mk IV, V and VI look indistinguishable at this scale anyway.

2x Webley Scott in Officers holster – the key difference to the NCO holster is the flap, it’s a closed holster, the NCO one is a open version that is just fixed by leather strap.

2x Webley Scott Officer ammo pouch – larger and squared off version in contrast to the smaller and rounder NCO version.

6x No 16 Grenades – the “No 16 oval grenade” was an upgrade of the No 15 ball grenade, originally intended to completely replace the No 15 it was removed from service after the fuse failed horribly (at Loos in 1915 18 of 20 did not go off).

2x Gas rattle -this vaguely sinister-by-implication device is just that, a common, if oversized, rattle to warn of incoming gas or gas shell bombardment.

8x MK I Steel Helmet – the other WW1 steel helmet that’s strongly based on a late medieval design, in contrast to the German sallet based Stahlhelm the Mk I Brodie helmet was based on the kettle hat. The bottom line is that, the questionable designator aside, this is another great set!