After opening and closing the box again on Trumpeters Krug kit due to the number of parts, I made the decision to enter this into the group build, 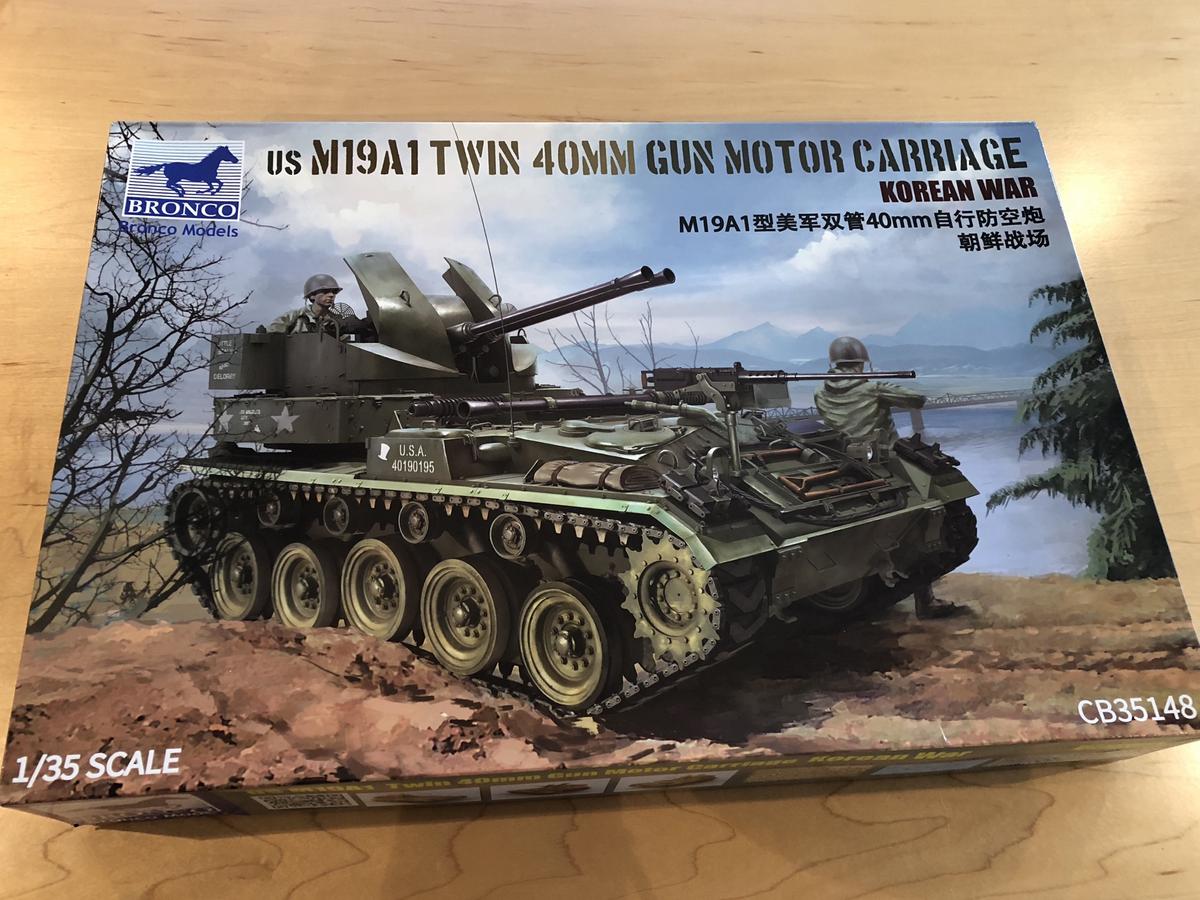 Bronco released this kit last year and it has been sitting in my stash since that time. Something about it appealed to me, but after purchasing it I can't tell you what that was!

The M19 and M19A1s were designed late in WWII but never saw any active service. The Chaffee hull was used as a base, the engine moved to the middle of the vehicle and a tub for twin Bofors 40mm cannon mounted at the rear. Where it did see service was Korea, and like a lot of these autocannon tanks found its real role as fire support for ground troops. The kit blurb states they saw service in late WWII, most forums suggest this is not the case. The Kit blurb also states that the turret section was repurposed for the Vietnam era "Duster" mounted on the M48 hull. Again this is unlikely as the turret rings of both are different, they may have obviously repurposed the guns.

The kit comes in a somewhat flimsy cardboard box with nice boxtop artwork of an M19A1 pulling overwatch on a bridge in Korea. The box is absolutely full of styrene. I didn't count the sprues, but there are lots. The hull tub is moulded in one piece as is the gun tub. The idler and drive sprockets have slide moulded hubs which give nice detail. The overall quality of the moulding is excellent, but there is some flash and given the usual Bronco method of lots of tiny parts, there will be some clean up to do and this will not be a quick build! My usual moan about Bronco kits is that something that could be moulded as one piece is usually done in 5 or 6 pieces, the drive sprockets for example have 6 pieces. Nice for those who like glue, but a happy medium needs to be struck somewhere!

The instruction manual comes in the usual A4 booklet form, I've read it over very carefully, it is a bit confusing and hard to tell where some bits actually go. Secondary reference material will be necessary. This is made worse by the fact that Bronco often doesn't provide a locating tab or hole.

Rounding out the kit contents is a Sprue of clear parts, a small PE fret and a small set of decals. There is also a piece of string for the tow cable, I'll replace this with wire.

Colour schemes are mainly all over OD for the Korean models. There is one in Verdant MRDC, this is fanciful and based on a museum M19A1 not actual service vehicles as the M19A1 was out of service well before his scheme was introduced.

Anyway, onwards, during this period of being stuck at home I should make steady progress.
I'm a serial kit starter....
Completed Campaigns:

...also forgot to add they include a full set of workable tracks, both the early T72 and the later T85E1. The T72 are simple clip together links, the T85E1 are multipart.
I'm a serial kit starter....
Completed Campaigns:

Nice entry Adam. I didn't even know this one has existed.
I hope that after this build you'll have raised your motivation to tackle the Krug

Is there a decal option for the Royal Netherlands Army?
They had those until the late 70s... though I suppose those woul have been choke full of NATO stanardtised equipment and who-knows-what modifications

Olivier Carneau wrote: ↑30 Mar 2020, 10:33 Nice entry Adam. I didn't even know this one has existed.
I hope that after this build you'll have raised your motivation to tackle the Krug

After spending 2hrs putting one sides worth of suspension arms together I wish I had just stuck to building the Krug!!
I'm a serial kit starter....
Completed Campaigns:

Man this thing is tough! The detail is amazing, the fit is perfect, but the parts are fiddly and delicate.

The plans are extremely complicated and not that clear. It would have been better if there were pics of what the part looked like once attached. Example below; 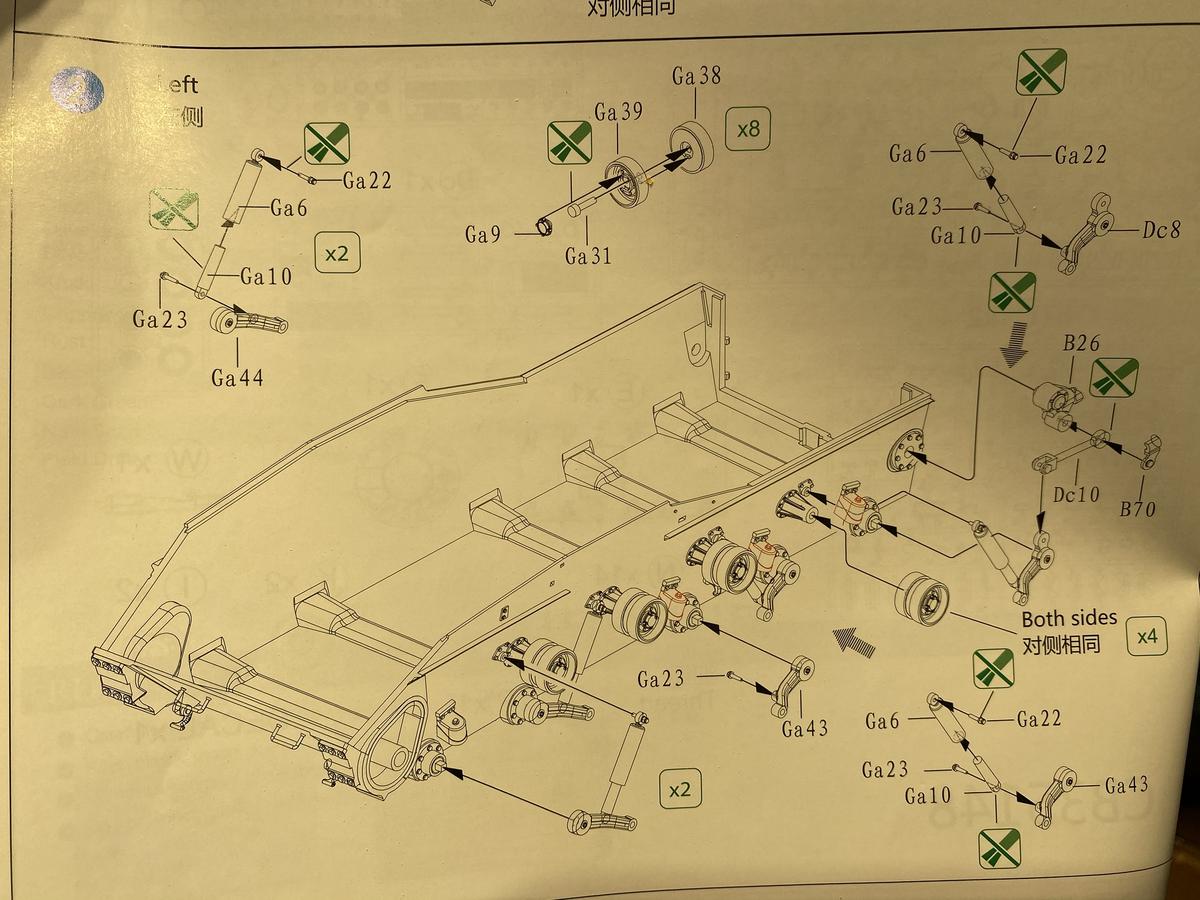 There is a bit of mental gymnastics to end up with this, 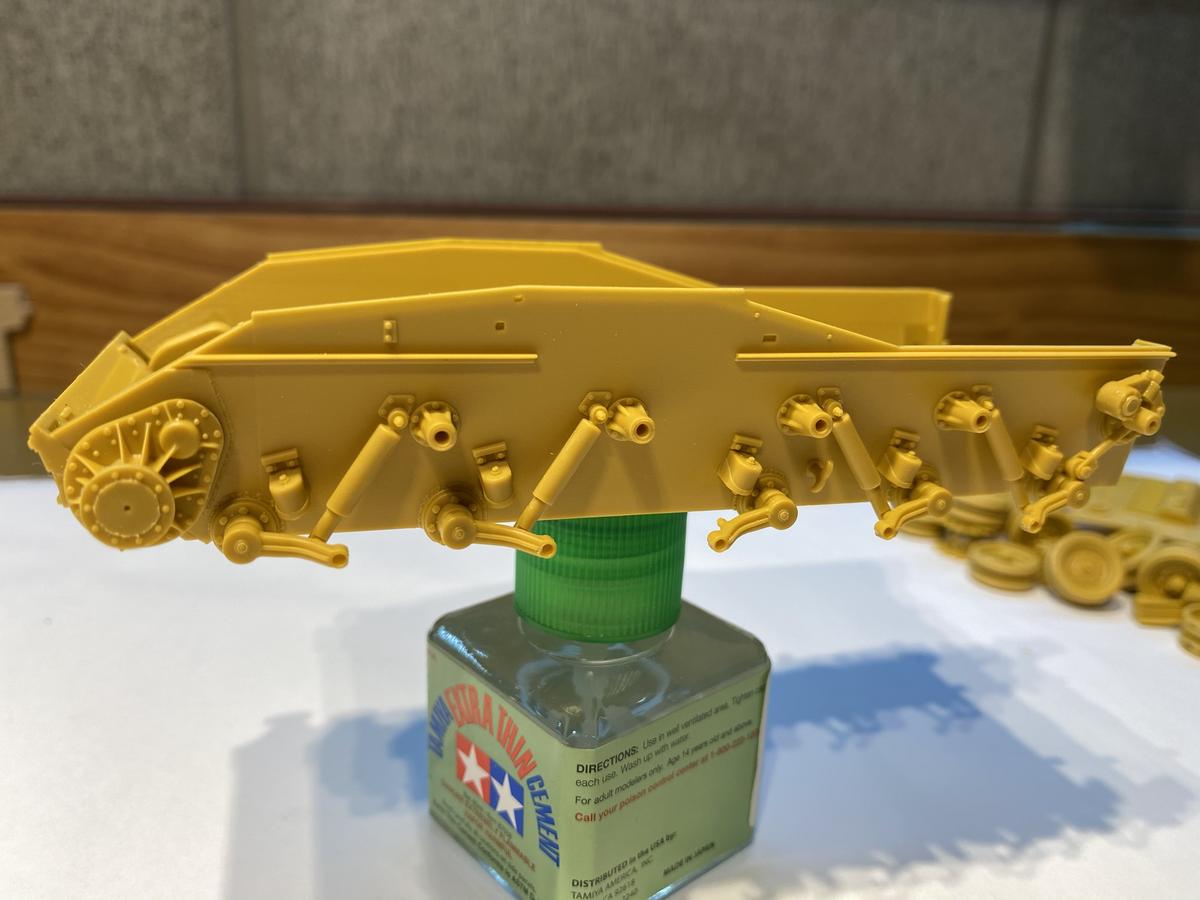 So far I have the running gear assembled as well as the wheels and return rollers. This is all very delicate and parts keep falling off. Bronco have done their best to make everything workable, but I'm going to glue it all up solid.

I had to take a break from the hull, so I built the ring of ammo storage boxes that surround the gun tub. I thought it would be easy, but again, something that could be cast in one piece is in several! However, again, fit is perfect and once you get the clean up done it just falls together. 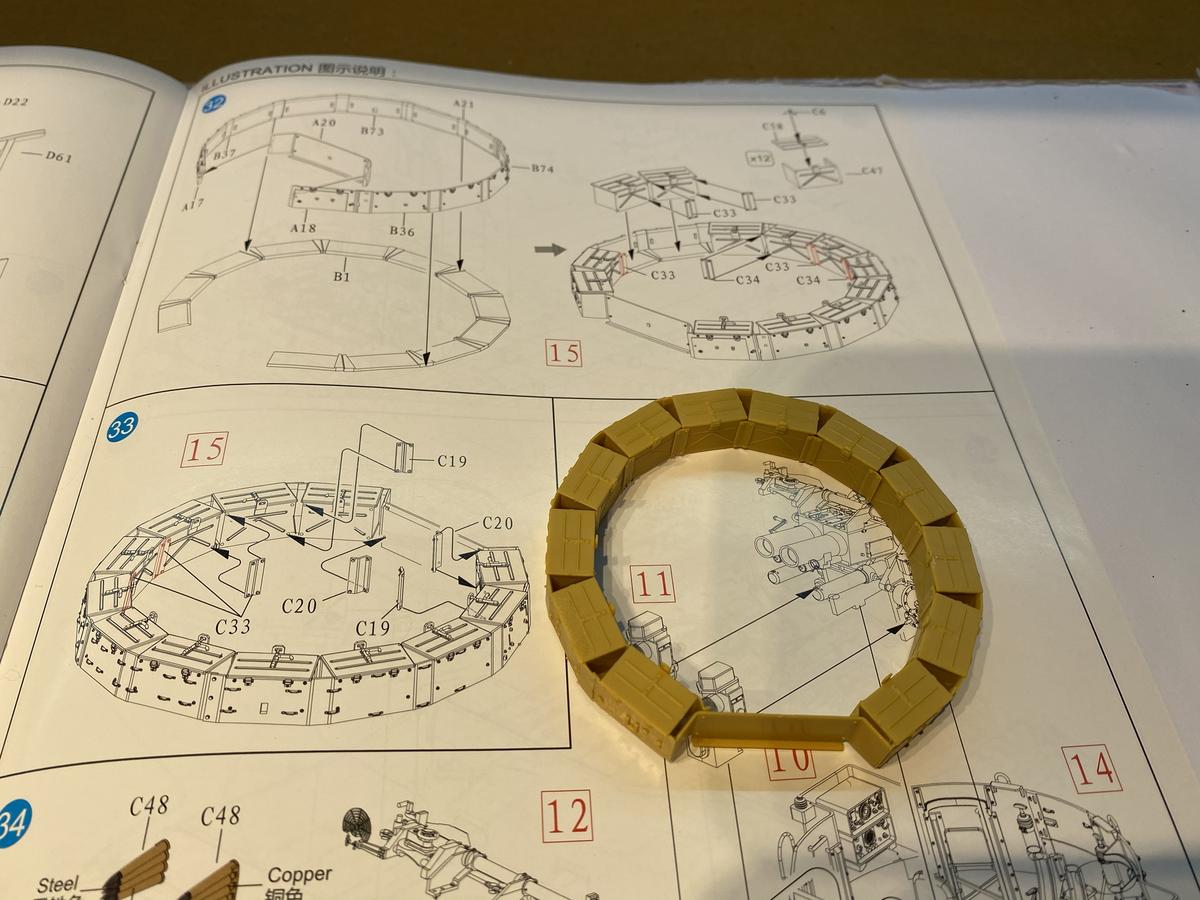 Great job on the suspension Adam!

Bronco seem to be a bit bipolar with their kits... the StuG E is essentially a cleaned up DML Imperial series StuG and as such pretty simple in spite of way better detail...

That's excellent for our ageing brains

Good job on the suspension. I remember having built only one Bronco Chinese APC and the instructions were the same type. At some steps you even need a magnifying glass to spot where you are supposed to glue the parts.
Olivier
http://olivier.carneau.free.fr

Adam- I build the US Chaffee from Bronco. The running gear was definitely challenging. It looks like you did a great job. I will be following for sure.

My AFV Club Chaffee had a really fiddly suspension as well, and it seems Bronco managed to top that

Good luck with the rest