Adam,
AFAIK they purchased them with the package for the AMX-13s, the 75mm guns for the M-50, and the M4A1s (76mm) VVSS and HVSS. From what I have read the IDF was not keen on wheeled vehicles and did not use them long. Here is what Wikia says on the subject.....

An order of 29 AML-90s placed by the Israel Defense Forces (IDF) in 1960 marked the first sale of AMLs to a foreign power, ushered in a new era of French arms sales to Tel-Aviv, and helped cement Panhard's success on the export market.[24] The IDF armoured cars had been received by the end of 1963 and were first displayed publicly on the eve of Yom Ha'atzmaut, 1966.[48] Israeli units were primarily impressed by their high mobility and ergonomic nature, which was deemed ideal for airborne operations.[49] Nevertheless, the AML-90's envisaged deployment by new Aérospatiale SA 321 Super Frelons also purchased from France did not materialise, as the helicopters could not handle its 5,500 kg combat weight.[18]

At least 9 AML-90s were in service with the 41st Reconnaissance Company of the Harel Brigade during the Six-Day War under a Major Amnon Eshkol, participating in the capture of Ramallah in June 1967.[50][51] The AMLs were initially posted at Mevaseret Zion following the fall of East Jerusalem. They were among the first IDF armour to cross into the West Bank during the conflict, probing for Jordanian resistance. Major roads had been blocked by tank barriers although these could be easily bypassed in nimbler armoured cars.[52] The much more cumbersome Super Sherman and Centurion tanks tasked with leading the IDF's spearhead towards Tell el-Ful failed to reach their objective; most were forced to turn back in the face of difficult terrain.[52] Joined by the surviving seven Shermans and eight M3 half-tracks, Major Eshkol's AML-90s later helped defeat a Jordanian counterattack with M48 Pattons.[52]

In the War of Attrition, Israeli AMLs faced Jordanian M48s again on the Damia Bridge during the Battle of Karameh.[18] Originally tasked with screening the IDF Centurions as they crossed the bridge, the lightly armoured AML-90 was at a unique disadvantage when confronted by entrenched Pattons. Moreover, the Jordan River was in flood and vehicle crews were unable to exploit their manoeuvrability in the muddy farmland. Several AMLs were knocked out by tank fire or towed anti-tank guns.[18] They were withdrawn from service not long afterwards.[18]

The Arab–Israeli conflict marked some of the highest armour-to-armour kill ratios achieved with the AML platform to date, including the destruction of at least 13 Egyptian and Jordanian tanks.[53] Especially notable were several T-54 kills credited to an AML-90 platoon in the Sinai Peninsula: as late as the 1980s, military scholars continued to maintain that the 90 mm DEFA cannon lacked the muzzle velocity to penetrate the thick steel hull of a T-54/55.[25] More well-documented cases have since verified this was possible, though only with multiple shots or a direct hit on the turret rim near the driver's hatch.[25][54] Israeli AML crews also sustained losses of their own during this engagement,[53] and some AML-90s may have been captured intact by the Egyptian defenders.[55]
Cry Havoc and let slip the Dogs of War
TreadHead is NOT an ugly word

Thanks Mark, the kit provides parts and markings for an IDF variant, but some of their neighbours also used them.

Back from a brief holiday and back to work tomorrow so primer shot this evening. 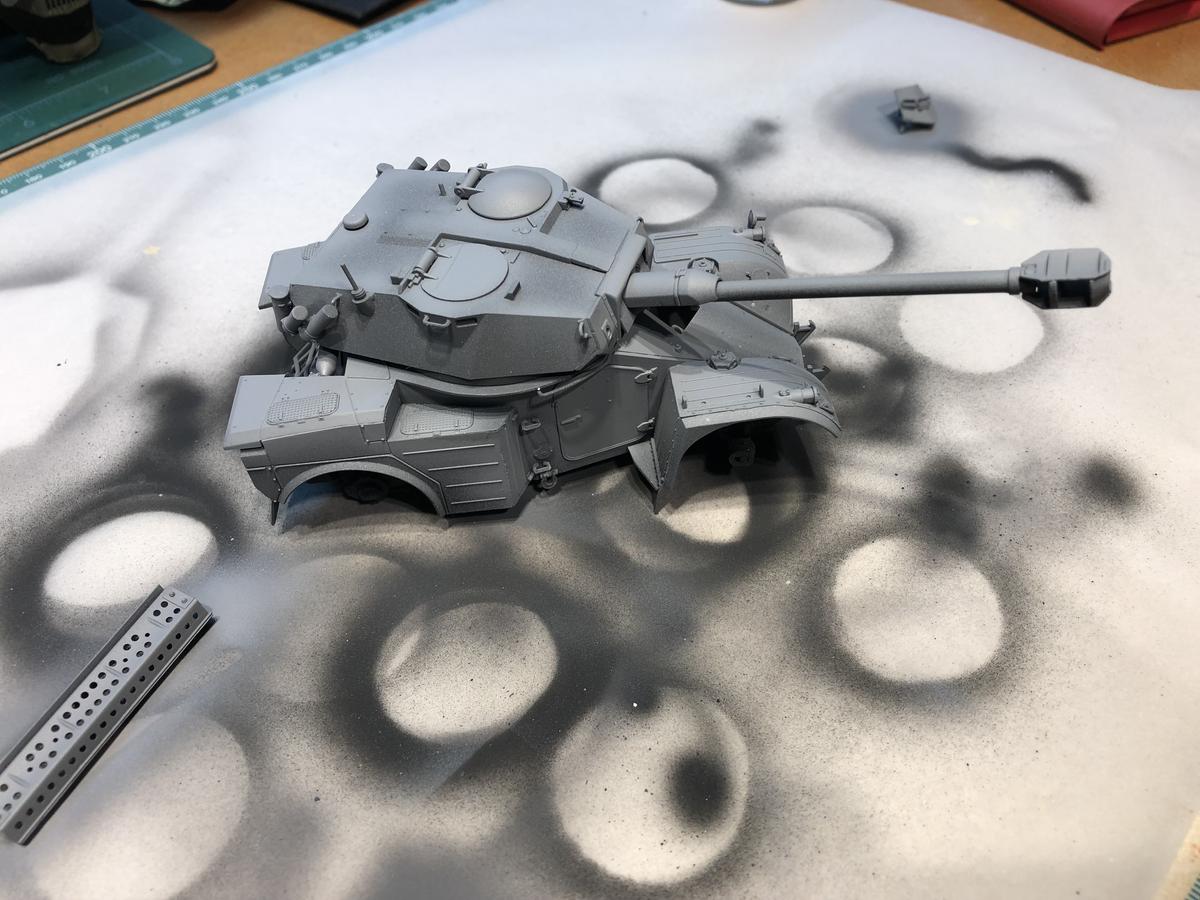 Nice to be building something straight OOB. No time to go stale on it 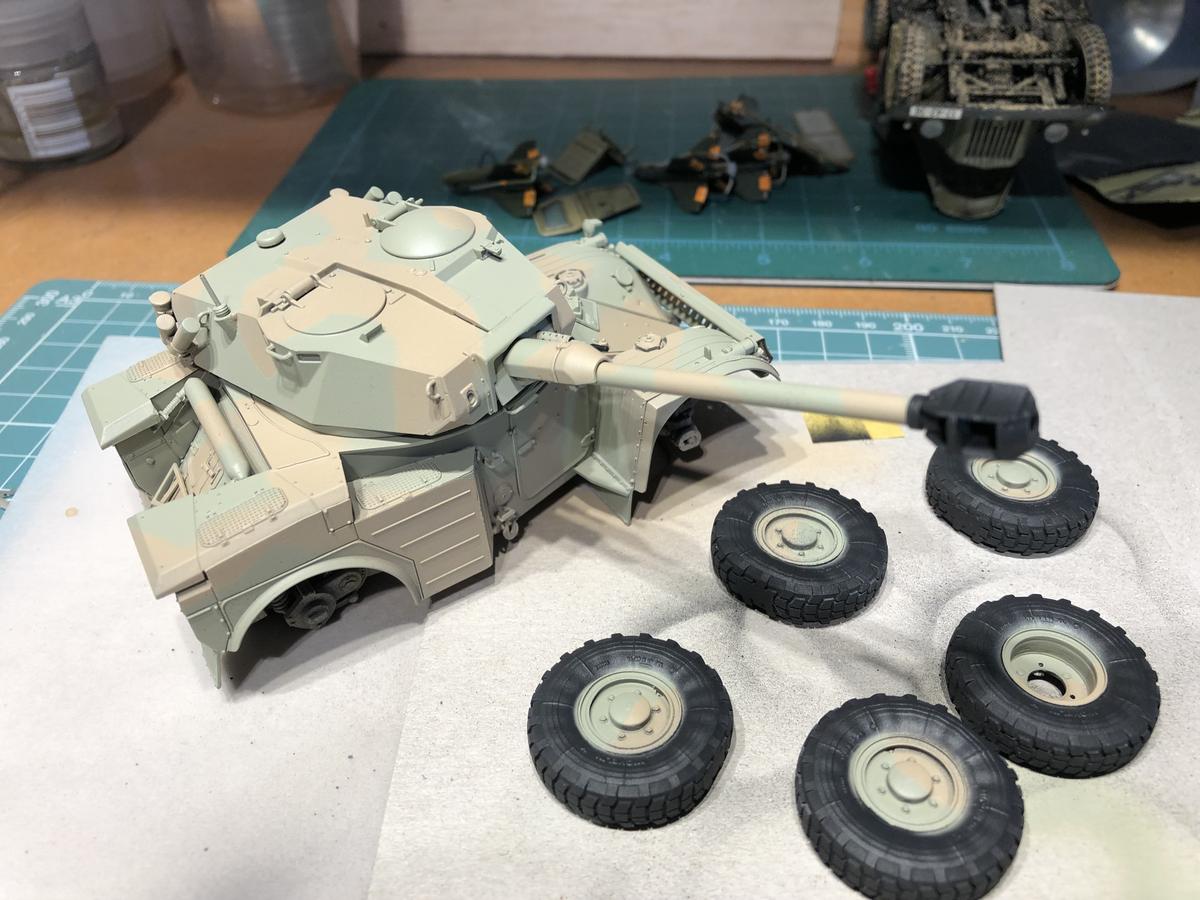 Have gone very light as I expect to heavily weather this one and don't want to darken it down into a black blob with subsequent filters etc.

Too hot and humid to go outside and do my chores today so started on the chipping. Mixture of sponge and brush so far with a bit of experimentation with streaking on the turret. 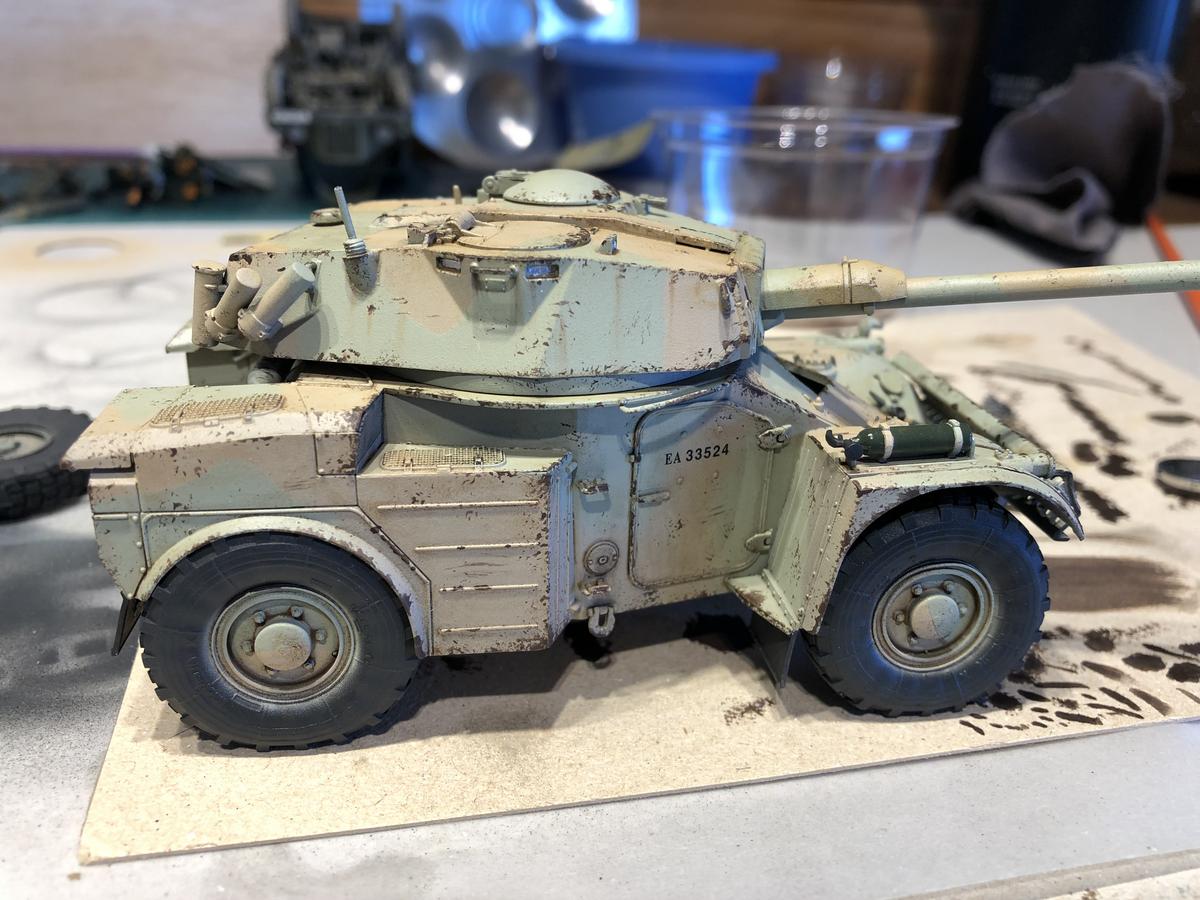 Wheels are just dry fit at the moment to see how they will look.
I'm a serial kit starter....
Completed Campaigns:

The painting and chipping are really well done Adam. Your really making the rest of us look bad, with the speed of your build.

The pace of building will come to a grinding halt as of tomorrow Shawn, we start normal work hours again and the boy will be back at school the week after that. Between normal hours, on-call, school drop off and school sports, I suspect my time at the bench will vaporise!

You certainly did the best with the time you had Adam

Not much more to add I'd say?

Interesting subject, quick build, good start on the weathering - just about ticks all the boxes Adam

Really nice looking!
Cry Havoc and let slip the Dogs of War
TreadHead is NOT an ugly word

In between flying down country to see Fatboy Slim play I managed to get some work done over the weekend. This is where I'm at now; 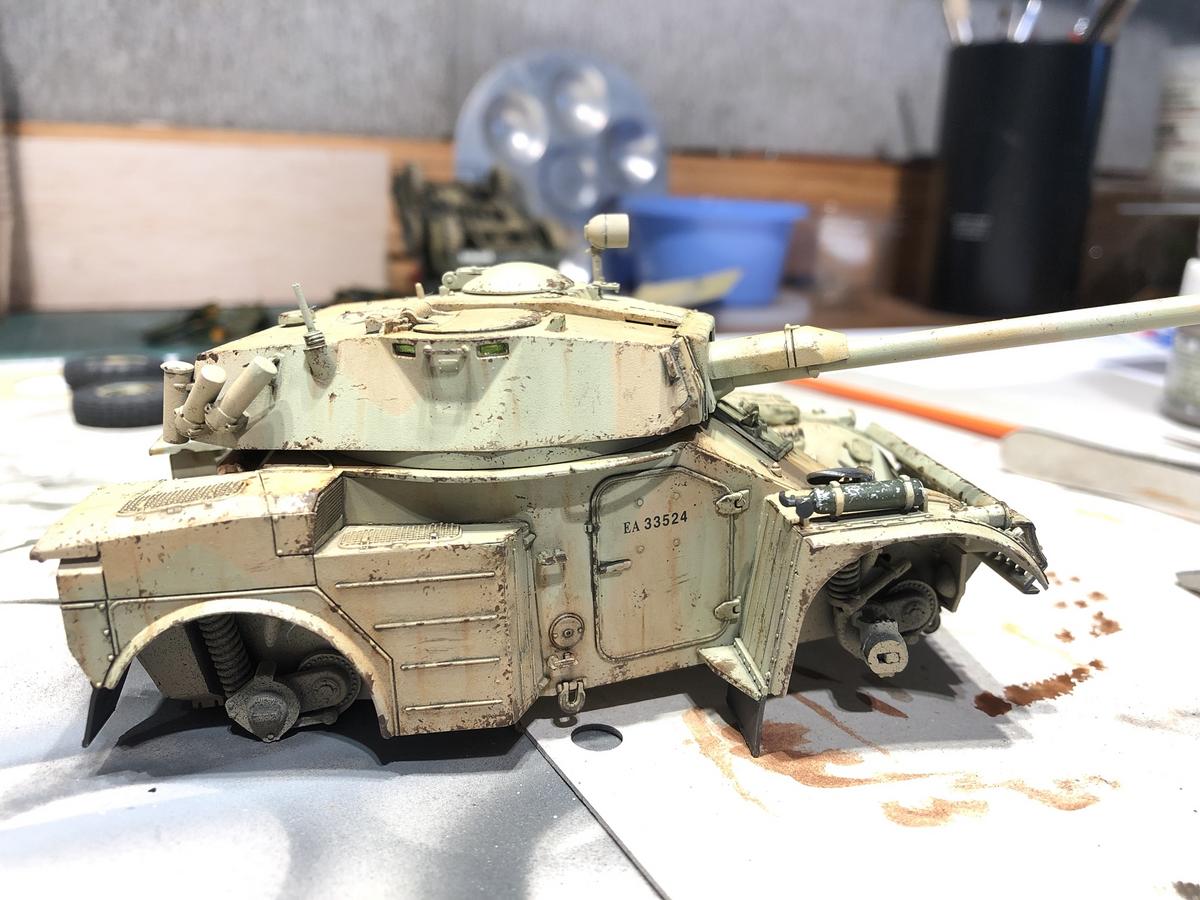 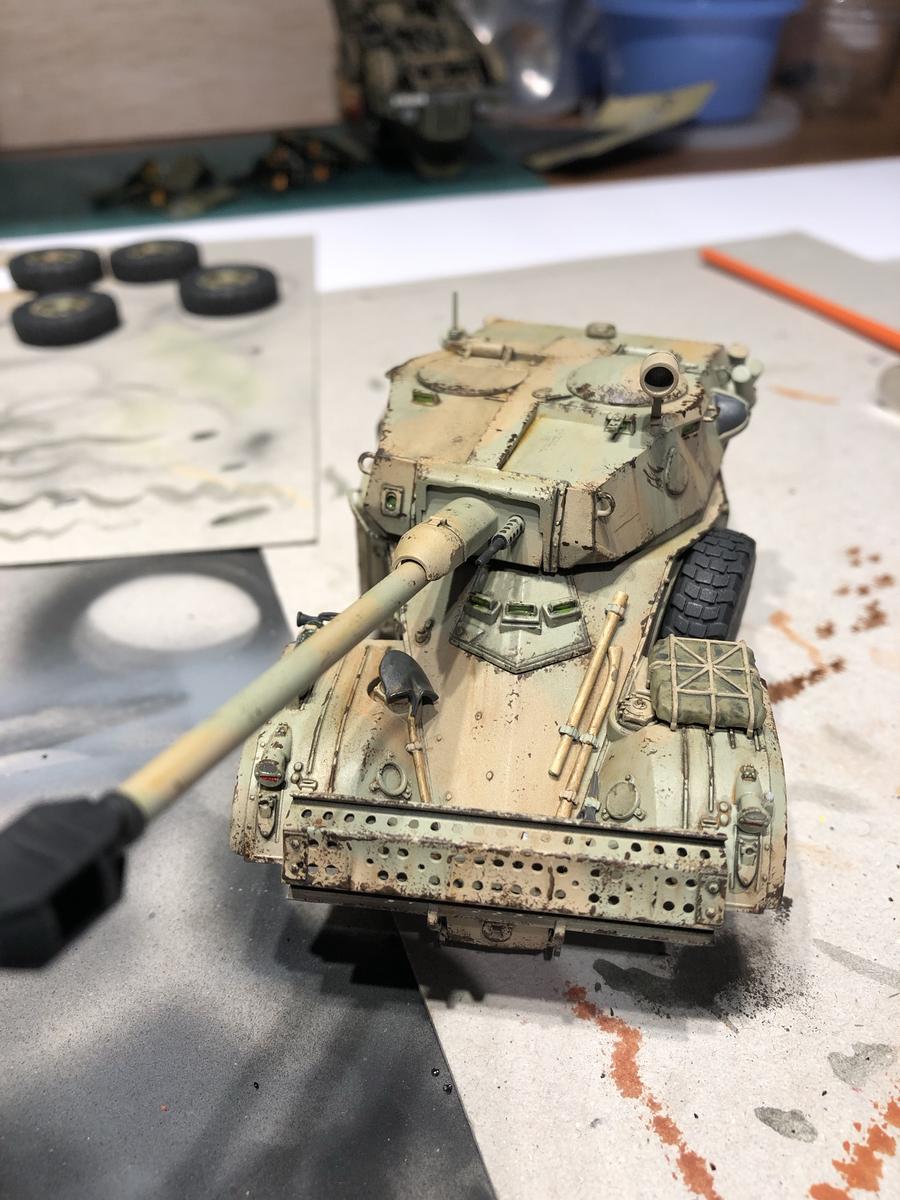 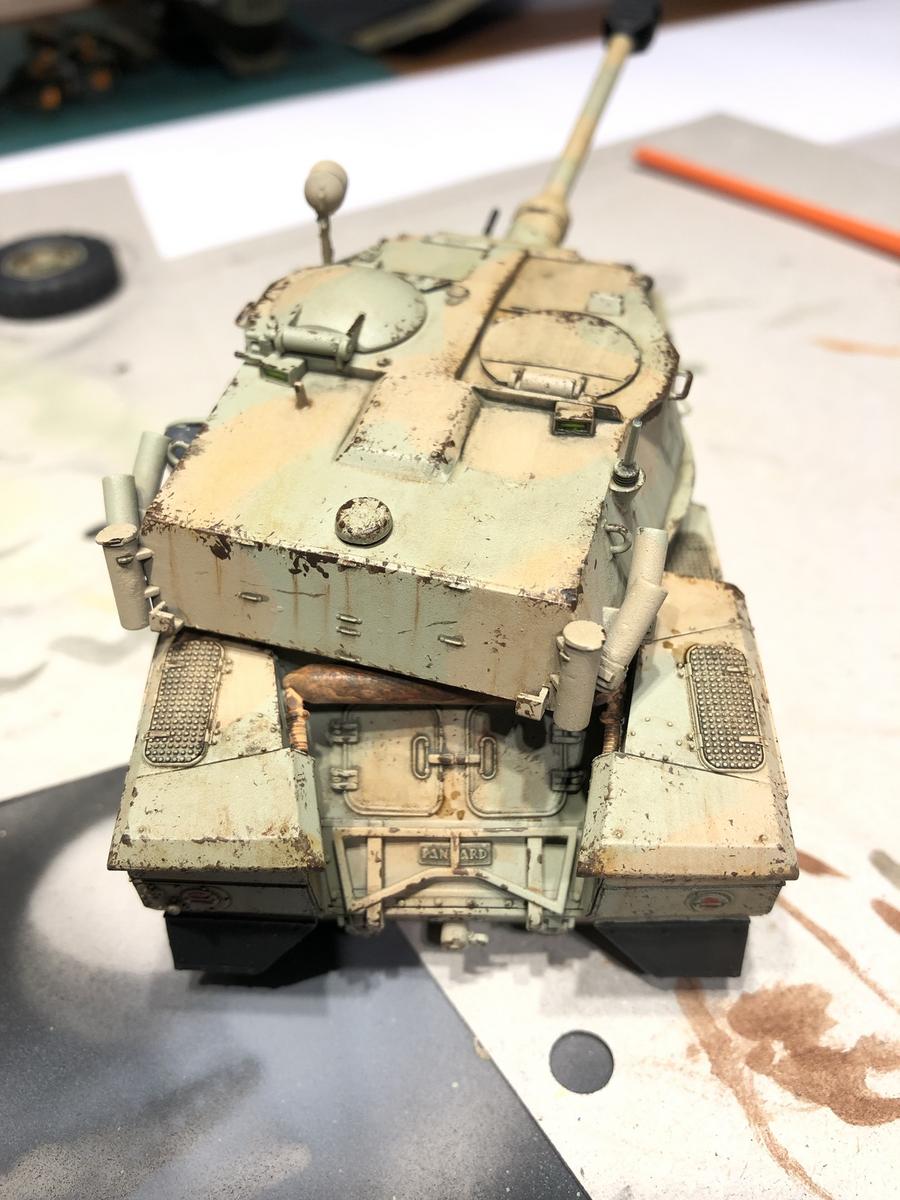 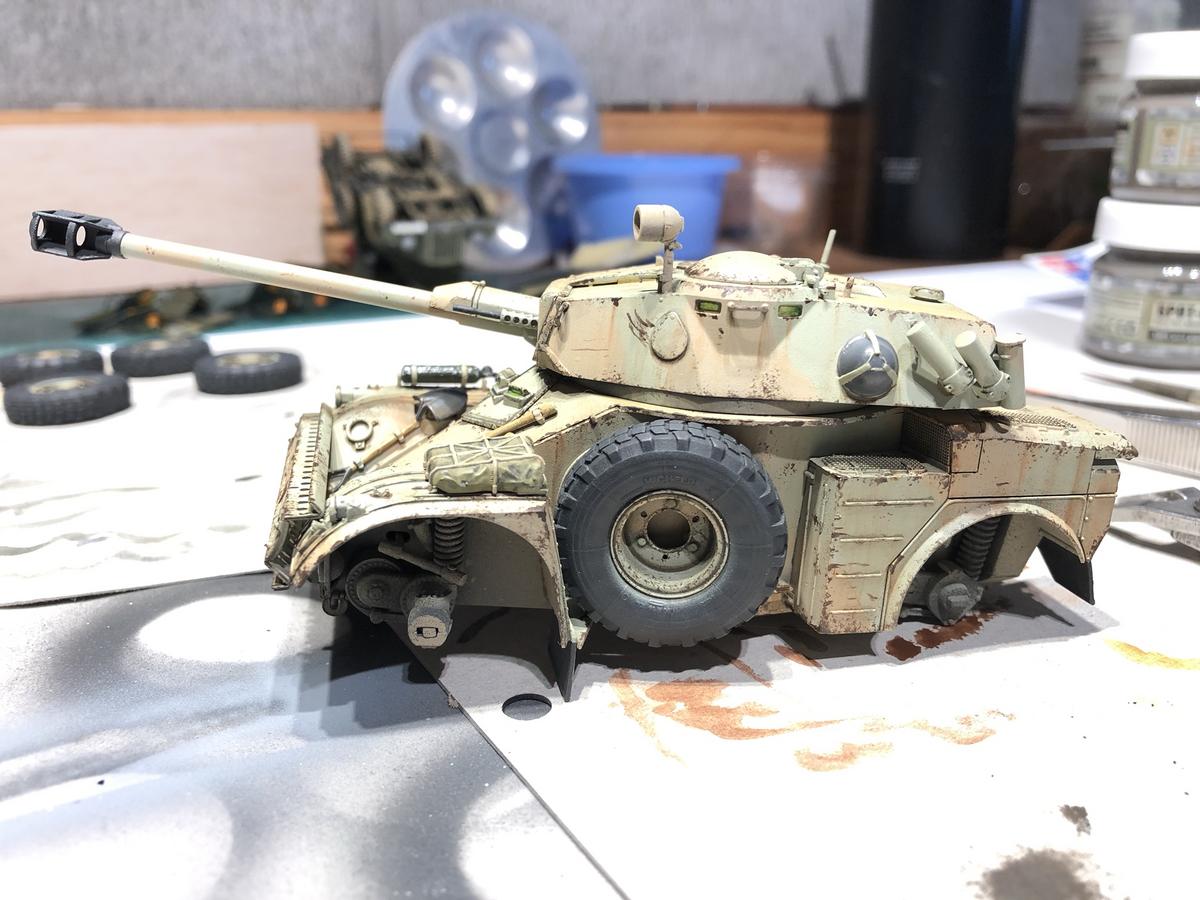 Just a bit of mud splatter to go, and I was thinking of adding some tussock tufts on the front as this appears to have been a popular camoflage technique for the Argentines.
I'm a serial kit starter....
Completed Campaigns: