And you thought you were safe from Raoul’s weapon set reviews? 😛 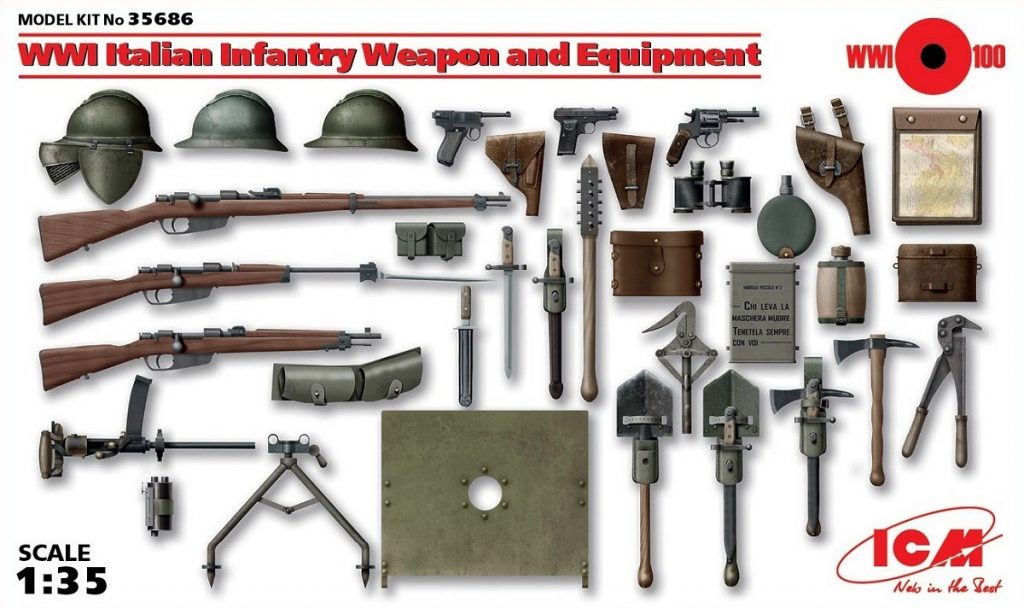 This time another thrilling (well for me that is, I have weird interests…) gun review for one of the,well not really minor, but certainly under-represented Great War era powers. As something of a late-comer (Italy entered the War only in late May ’15) in the proceedings one would have expected that there had been some lessons learned by the Italian staff under Luigi Cadorna and indeed it made some new and impressive mistakes along with the classical ones. Eleven (or twelve if you consider the Battle of Caporetto 12th Isonzo) insanely bloody Isonzo Battles later Italy at least boasted some intriguing new weaponry in it’s arsenals more suited for alpine and trench warfare than the initial equipment and several weapons having proven to be inefficient had been handed down to the troops not immediately engaged in the front-line. 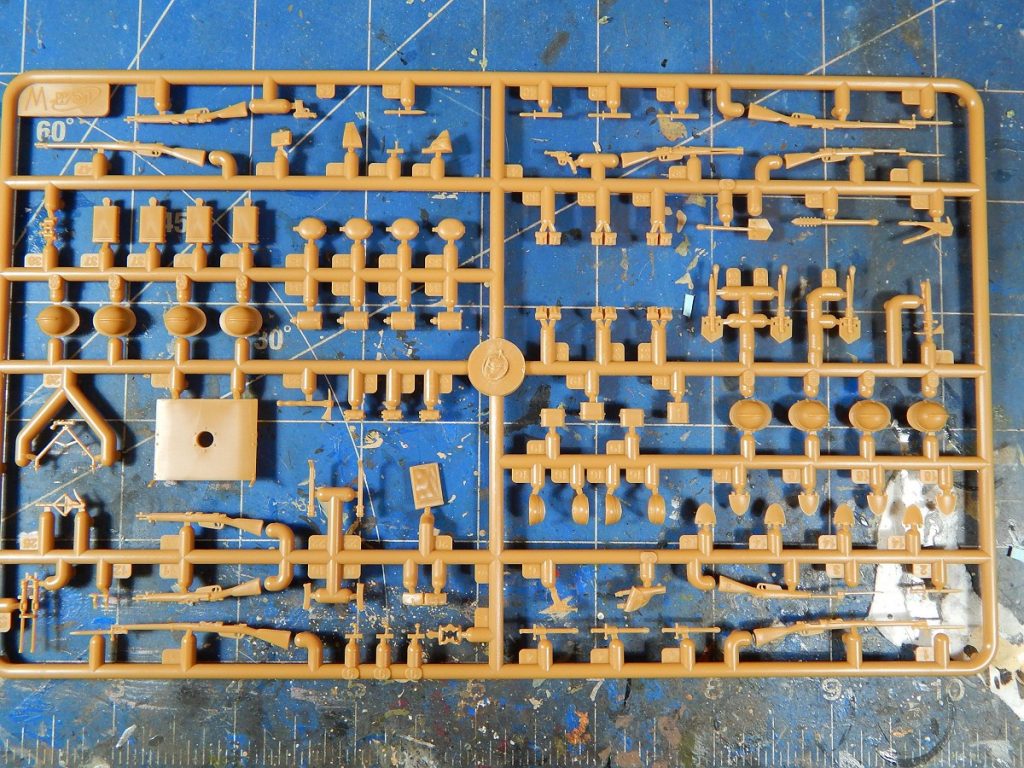 2x Villar-Perosa M1915 SMG – this weird if effective little gun started out as a light aircraft weapon mounted in the observers cockpit. It was actually two SMGs mounted parallel into one double lead thrower, each having a 25 round magazine of the rather weak 9mm Glisenti round (actually dimensionally close enough to the much more powerful 9mm Parabellum to blow up any 9mm Glisenti chambered gun if used with the seemingly compatible round…). This was used in a carry harness strapped to the chest of the user. Was surprisingly effective in spite of it’s weirdness it was initially deployed one section of these to a battalion of infantry starting in May ’16 and upped to three sections per battalion in ’17 because of it’s efficient use and high mobility provided by such comparatively light and manoeuvrable solution (keep in mind this was way before the true SMG arrived in form of the MP18). It was also deployed as an ultra light MG in the form of…=>

2x Viller-Perosa M1915 SMG with shield – the same weapon mounted in a easily transportable somewhat shrapnel proof shield to produce an extremely light way of manoeuvring automatic fire-power around in the assault and to set up halfway decent defensive fire if a trench was captured. Both the shielded one as well as the un-shielded item come in 5 parts for the gun and a bi-pod or a three-part shield respectively. 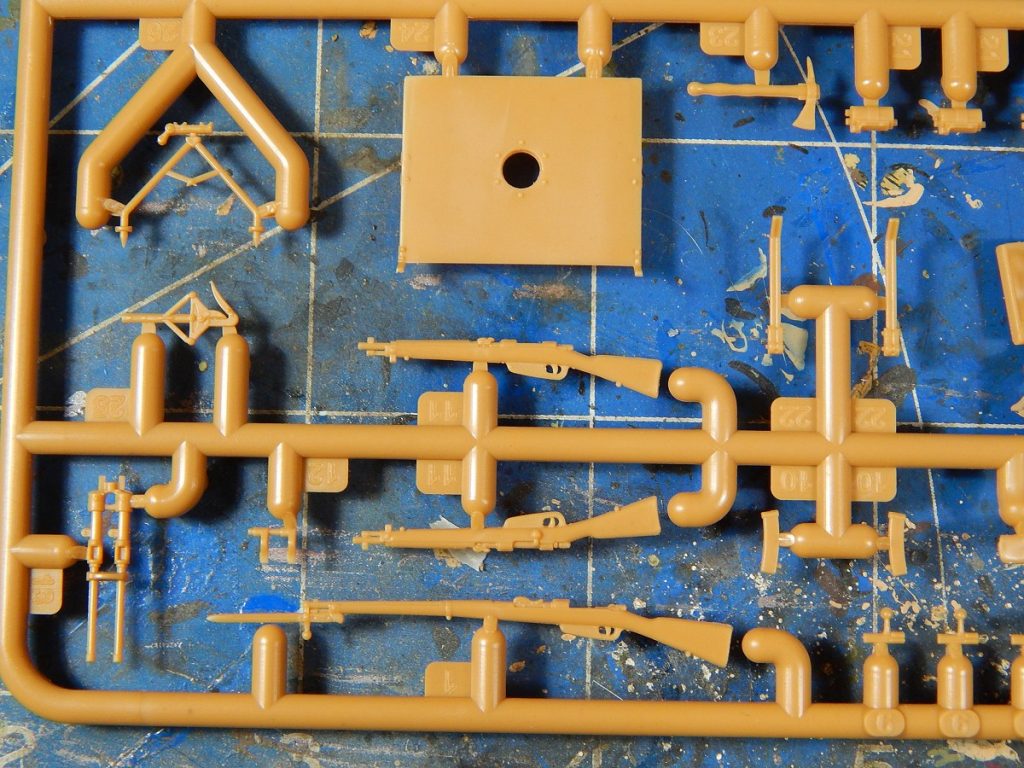 2x Mannlicher-Carcano Modello 91 Rifle – here is the standart service rifle of the Kingdom of Italy. It’s a chambered in a competitively small calibre (6.5x52mm Carcano) resulting in a flat trajectory and lower weight for the 6-round en-bloc Mannlicher pattern clip. As another one of those rifles it served though the late 19th and 20th century in the armies of *deep breath*: The Kingdom of Italy (duh!), the Italian Social Republic, the K.u.K. Empire (captured), the Principality and then First Republic of Albania, the Kingdom of Bulgaria, the Independent State of Croatia, the Ethiopian Empire, Egypt, Finland, The German Empire (captured), the Empire of Japan (the Combined Fleet specifically because all the Arisakas went to the army), the Imperial State of Persia (later the Imperial State of Iran), the Republic of China (of course), the Kingdom of Romania, the Kingdom of Serbs, Croats and Slovenes, the Socialist Federal Republic of Yugoslavia (some saw even sporadic service in the Yugoslav Succession Wars in the mid-1990s!), Somalia, the Kingdom of Saudi-Arabia, the Crown Colony of the Island of Malta and its Dependencies, Nazi Germany (secondary troops as well as captured after Italy changed sides), Liberation Army of Libya. Also Lee Harvey Oswald is said to have used a derivative (M91/38) in a certain famous assassination case. 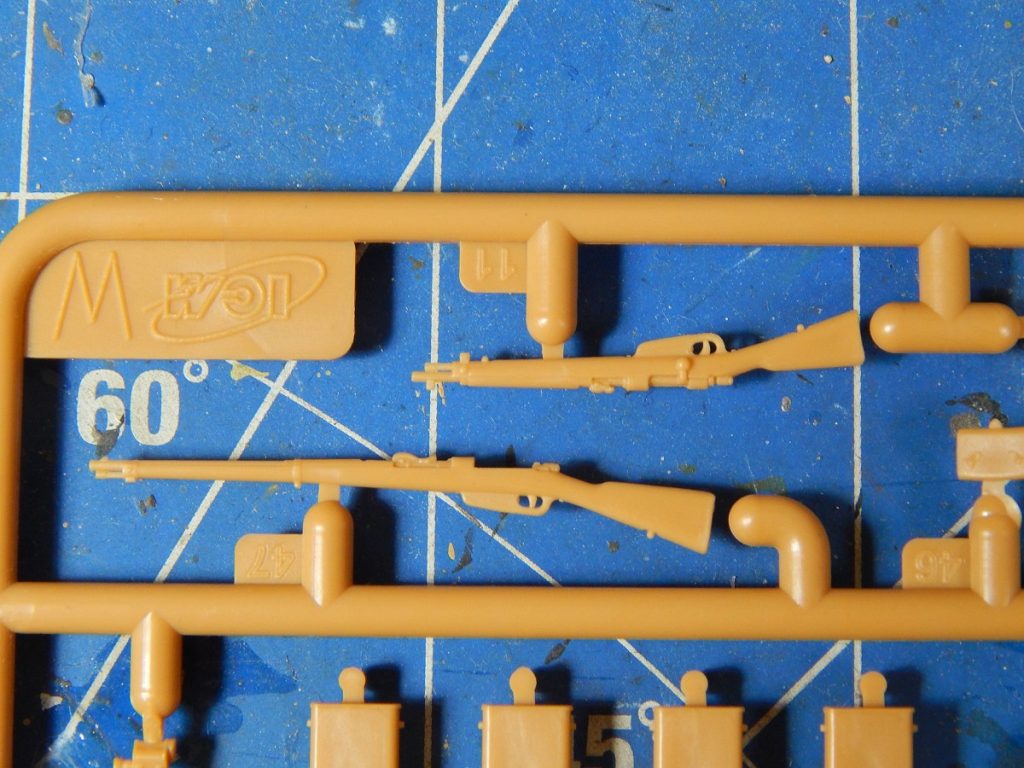 6x Mannlicher-Carcano Modello 91 Moschetto da Cavalleria – originally a 1893 pattern cavalry carbine, very light and comes with a folding bayonet. Became a more and more prevalent and preferred gun because it’s way more manoeuvrable under trench conditions. Eventually became one of the preferred rifles of the storm-troopers (Arditi) and by the association with elite troops much loved and used by the Fascist paramilitaries in the interbellum. 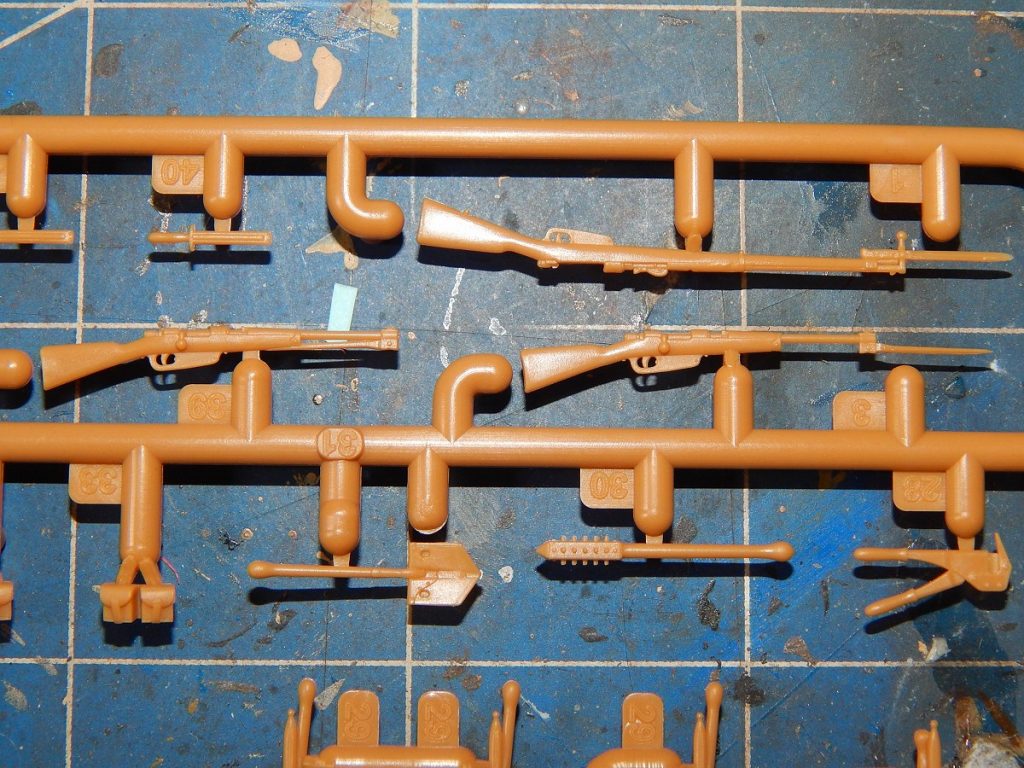 2x Mannlicher-Carcano Modello 91 T.C. – closer to an intermediate sized rifle than a carbine, this was a weapon intended for “Truppe Speciali” (“special troops”) machine gun, mortar and motorcycle troops, essentially specialist troops, and thus provided with the cavalry ads well as the infantry sling mountings (specifically for the motorcyclists). Provided the base for later intermdiate sized rifles in the late interbellum and Second World War. 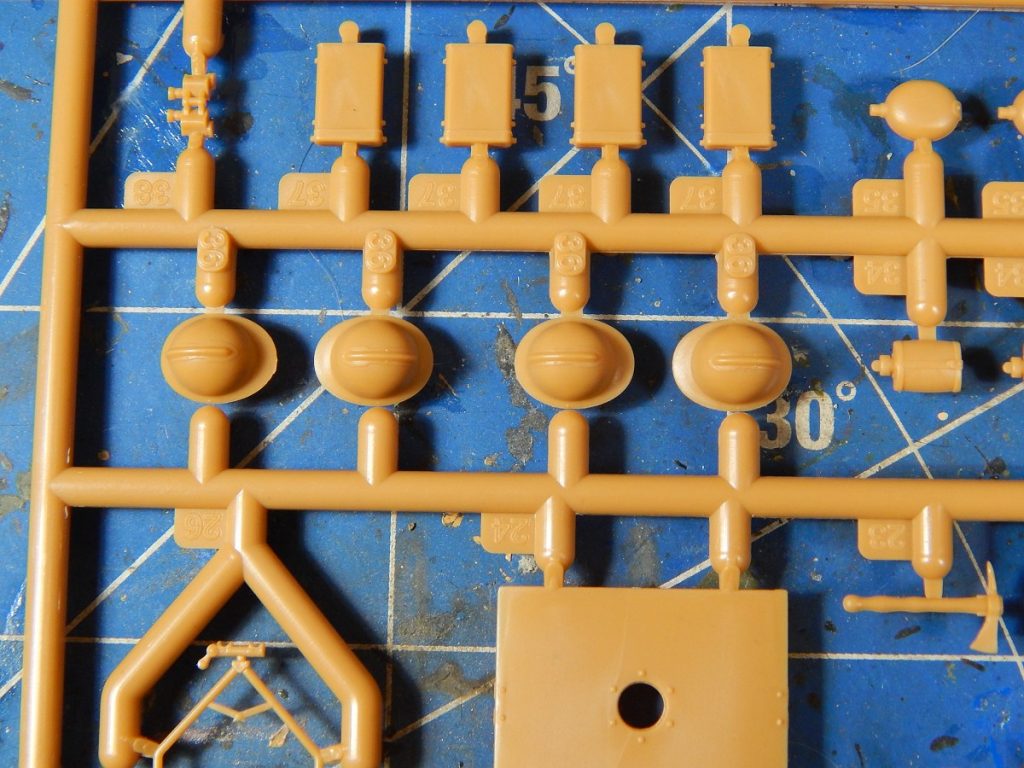 2x Bodeo Model 1889 service revolver – a pretty much already obsolescent by 1914 revolver, still used by the Italian army all the way to 1945 because it was, while underpowered in the obsolescent 10.35mm calibre, supremely reliable. Was also considered an option for officer and specialist pistols by the Wehrmacht as the “Revolver 680(i)”. Strangely enough this is the version with a trigger guard, not the way more common version with a folding trigger.

2x Holster for the aforementioned

2x Glisenti Model 1910 automatic service pistol – the intended replacement for the M1889 revolver. Chambered in the comparatively weak 9mm Glisenti cartridge necessitated by it’s rather overly complex and weak firing system this was not a success. While decently serviceable in peacetime it proved way to easily jammed, blocked, stuck or downright broken under conditions of trench warfare and thus was subsequently replaced with the front-line troops by the excellent… =>

2x Beretta M1915 service pistol – the iconic Beretta pistol, a simple blow-back pistol at this point with an already thoroughly familiar “Beretta”-silhouette it was manufactured in 9mm Glisent, but capable of withstanding 9mm Parabellum if necessary and later also built in a slightly scale down version for rear line troops and non-field officers in .32 ACP (7.65mm). 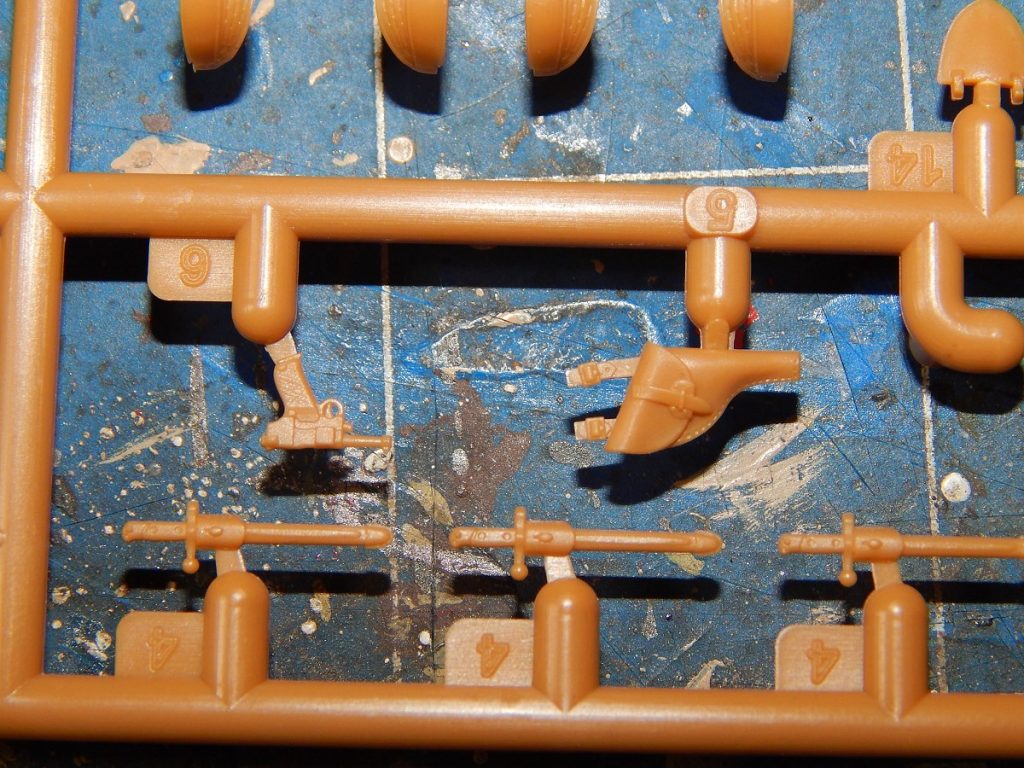