Raoul Kunz is back with more weapons to review… 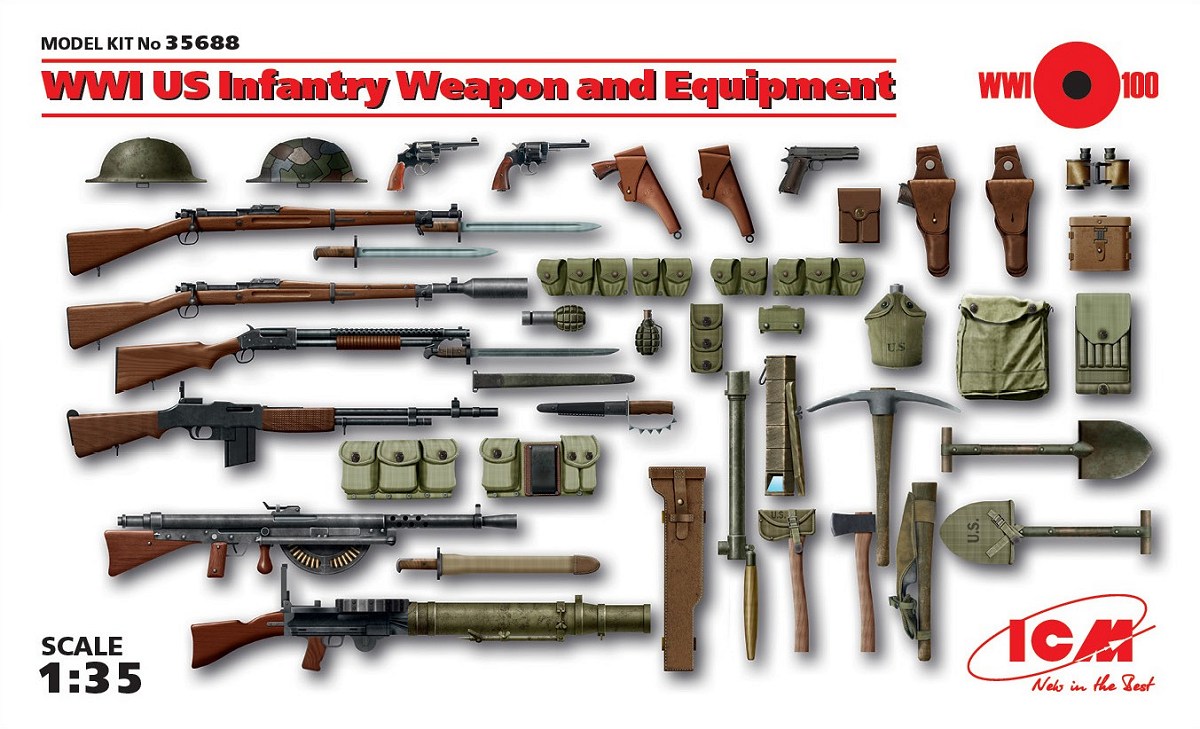 Everyone comfortable in these classic furnishings? All right , let’s get this going!

Following the usual pattern I will go though what is contained in the set and add some comments if appropriate or interesting. Redundantly I’d also like to mention that both moulding and sculpting are excellent. 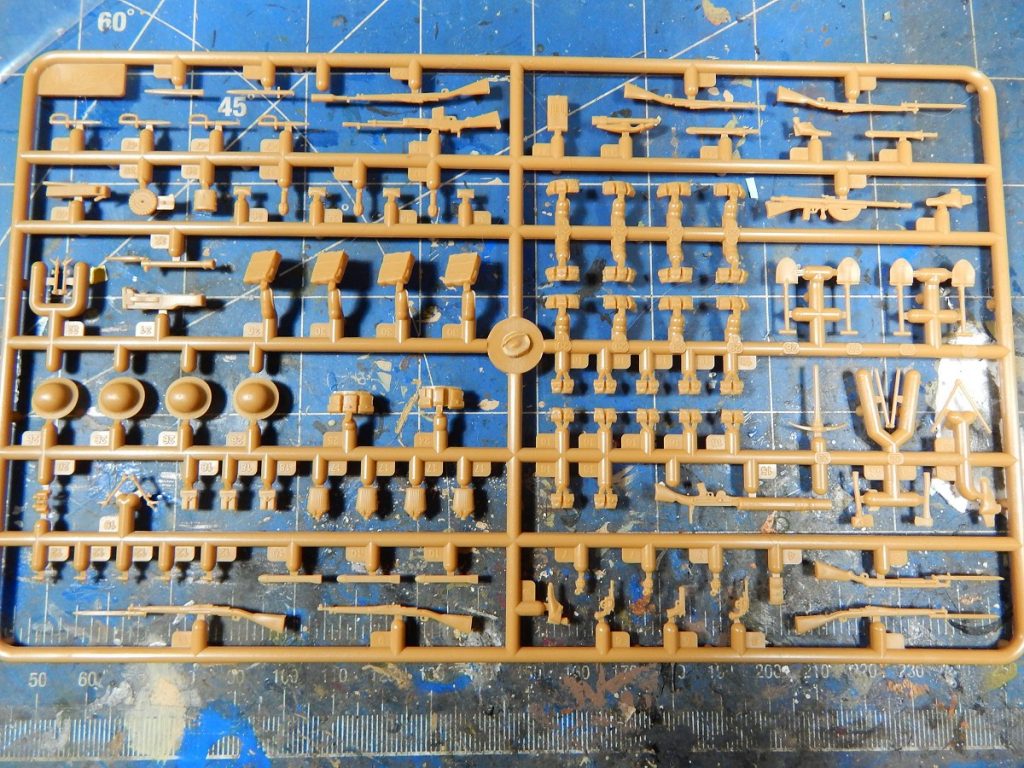 2x Lewis Machine Gun – This is the .30-06 calibre version of this iconic American designed, though Belgian patented and British produced LMG. Comes with a highly detailed bi-pod (folded and deployed version included). It’s at this scale externally identical with the .303 British version.

2x Chauchat CSRG Mle1915 machine gun – More correctly and appropriately an automatic rifle (Fusil Mitrailleur Modele 1915 CSRG) to be carried by a single soldier on the assault providing suppression fire from the hip, this weird-looking gun has an undeservedly bad reputation, primarily because arriving American troops where supplied with a .30-06 version that really, really, really did not work with the Springfield ammo and jammed on something like every third round. Comes with a bi-pod in folded up and deployed versions. This is the French version that the AEF actually used in the field, the horrible .30-06 was a training version that made the troops distrust the real thing once they got it… 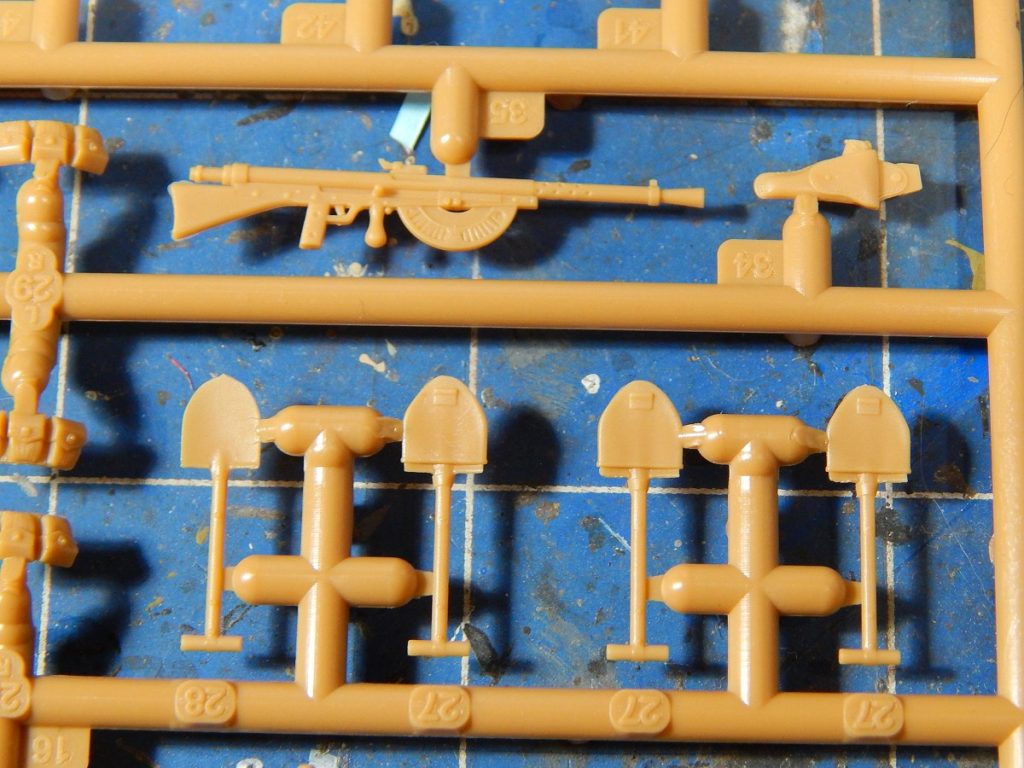 2x M1918 BAR – the original version of the iconic (B)rowning (A)utomatic (R)ifle, essentially John Moses Browning’s version of the Chauchat concept wise. Same purpose of providing “Walking Fire” during the advance to keep enemy troops in their trenches once the artillery suppression had to be lifted as well as providing fully automatic bursts in the final moments of the assault. It’s ever so slightly different than the later 1918A2 of World War 2 fame lacking some stabilizer elements and having a beefier front grip. Interestingly training for it was developed and provided by J. M. Browning’s son Val in person in France. It comes with the 20 round magazine because the conceptualized 40 round box magazine proved unwieldy in the field tests. 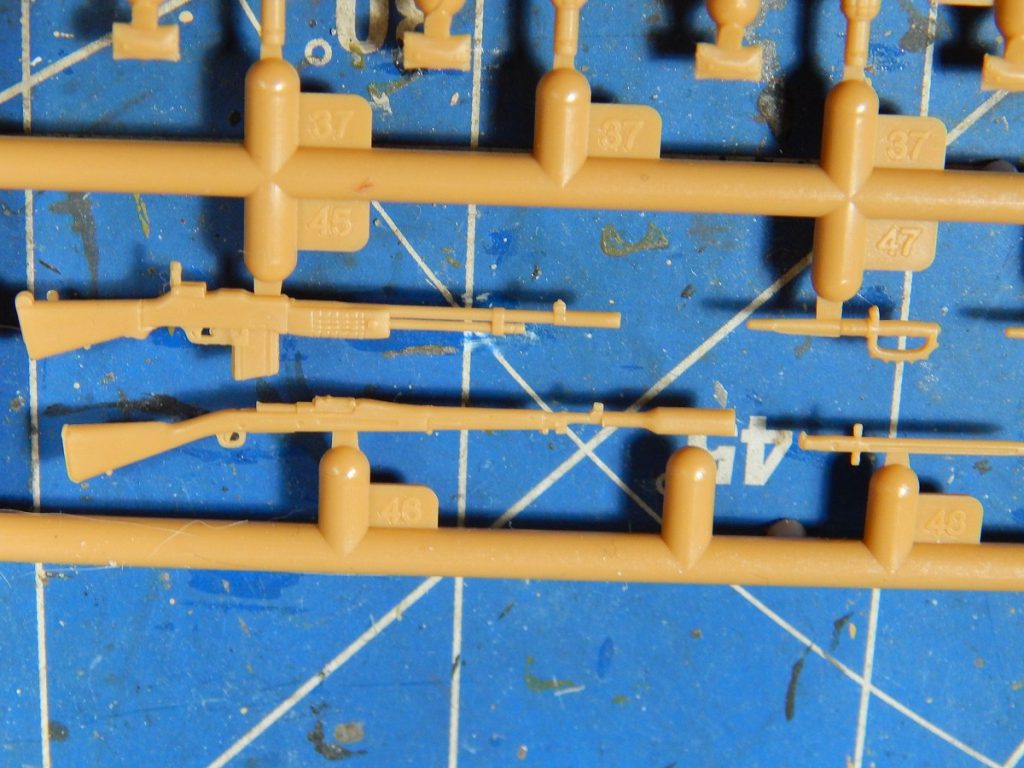 4x Springfield M1903 – the last of a long line of short lived US army service rifles in the late 19th and early 20th century in a bid to replace the antique Springfield Trapdoor modification of the Civil War vintage rifled musket. In case it is not immediately obvious at this scale: it’s a Mauser pattern rifle, it’s essentially a M93 Mauser in pretty much everything except ammunition. Five round stripper clip fed internal magazine, Mauser pattern bolt and locking system… it’s an intermediate length Mauser rifle, made in the US.

2x M1905 bayonet – 16-inch blade sword bayonet, very typical for the early 20th century short sword that makes a rifle into a glaive or voulge instead of a spear. Mostly useful for intimidating POWs, not so much for anything else…

2x Winchester M1897 “trench gun” with fixed M1917 bayonet – another Browning derived pattern shotgun modified to be fitted with the M1917 bayonet and used primarily for the same purpose as the German SMGs: close quarters trench cleaning. Though it was also used by trap shooting capable soldiers to actually hit thrown hand grenades while airborne. No – really!. The German army protested it on the basis of the Hague Convention but of course it was not banned, given this war saw the use of combat poison gas among other horrible implements a ban would have been ever so slightly hypocrite. 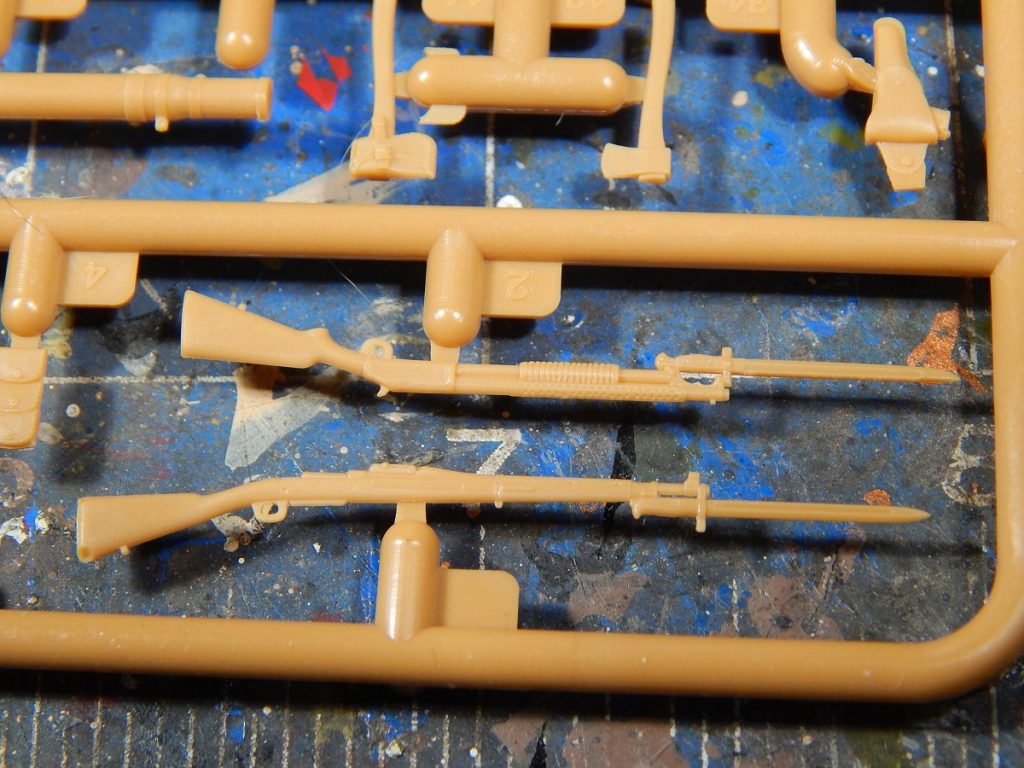 2x M1917 Revolver – a modification made by Colt to their M1909 service revolver to be used with the .45 ACP round when it turned out that there was a lack of M1911 automatic pistols.

2x Smith & Wesson Model 1917 – the other result of the pattern M1917 revolver requirement. This time it was the Second Model .44 Hand Ejector revolver adapted to the .45 ACP round as well.

2x Colt M1911 – pretty much nothing to add about this iconic pistol. It served the US army from roughly 1912 in several versions all the way until the 80s. This is the ur-version. 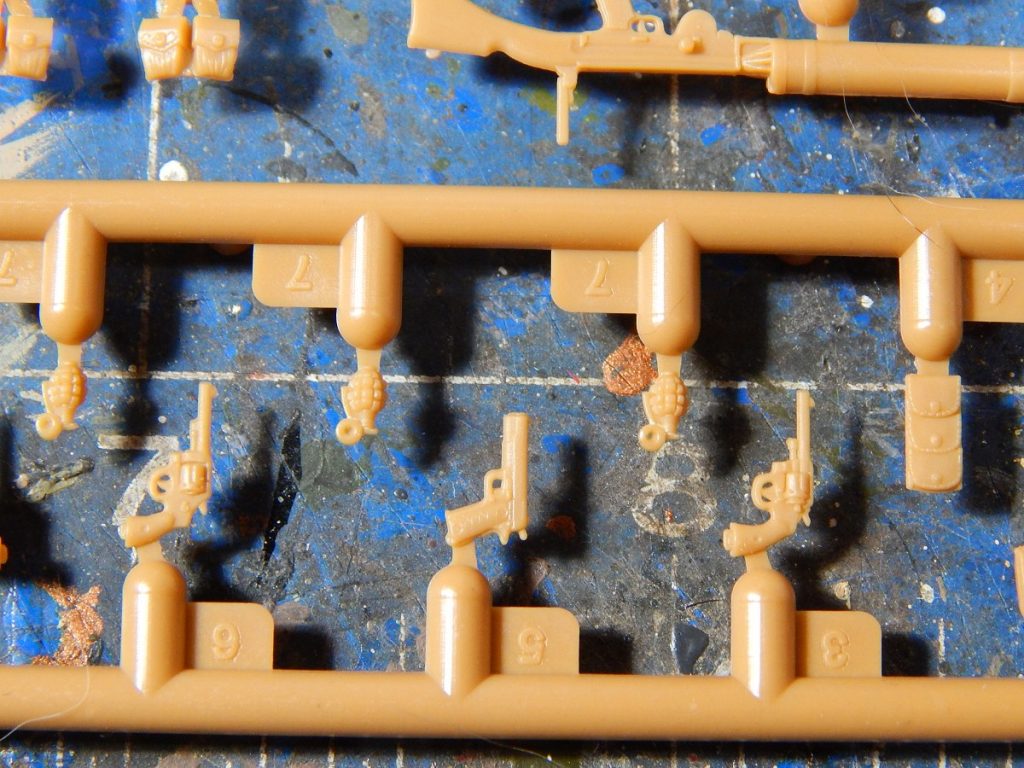 2x M1 grenade – essentially a US made semi-copy of the iconic French F1 frag grenade. 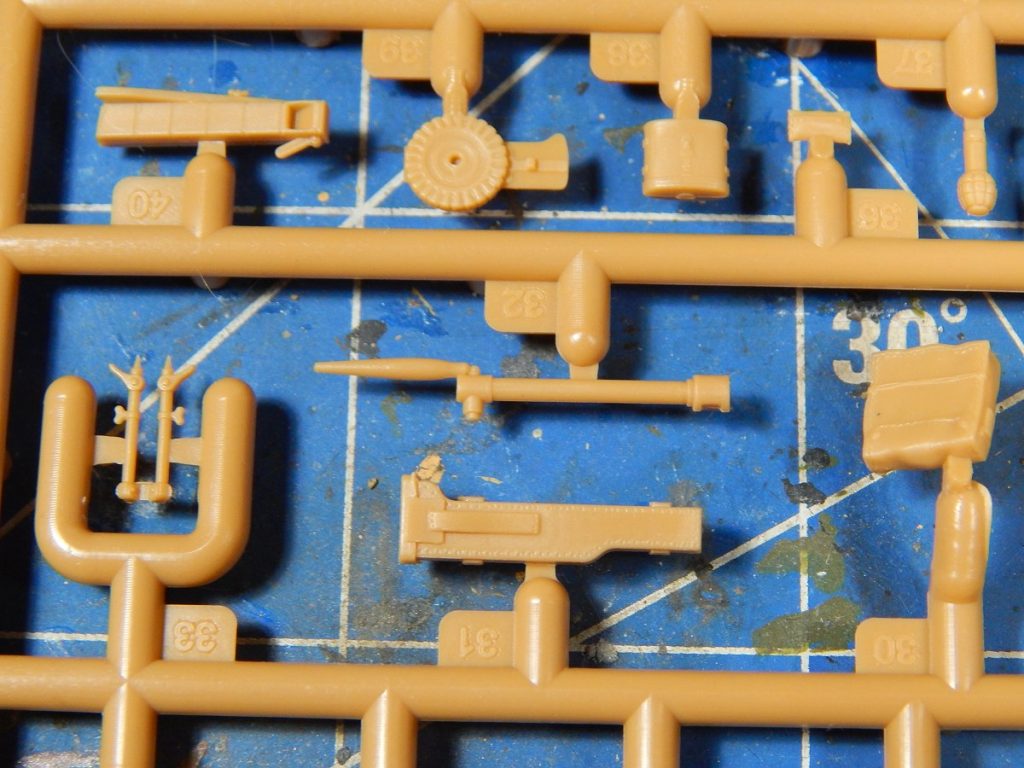 Over all a very nice set, however it has a glaring hole: sadly enough it lacks the service rifle of the AEF… the M1917 “American” Enfield, formally United States Rifle, cal .30, Model of 1917. This was the cream of the crop, most modern US adoption of the Enfield P14 rifle.