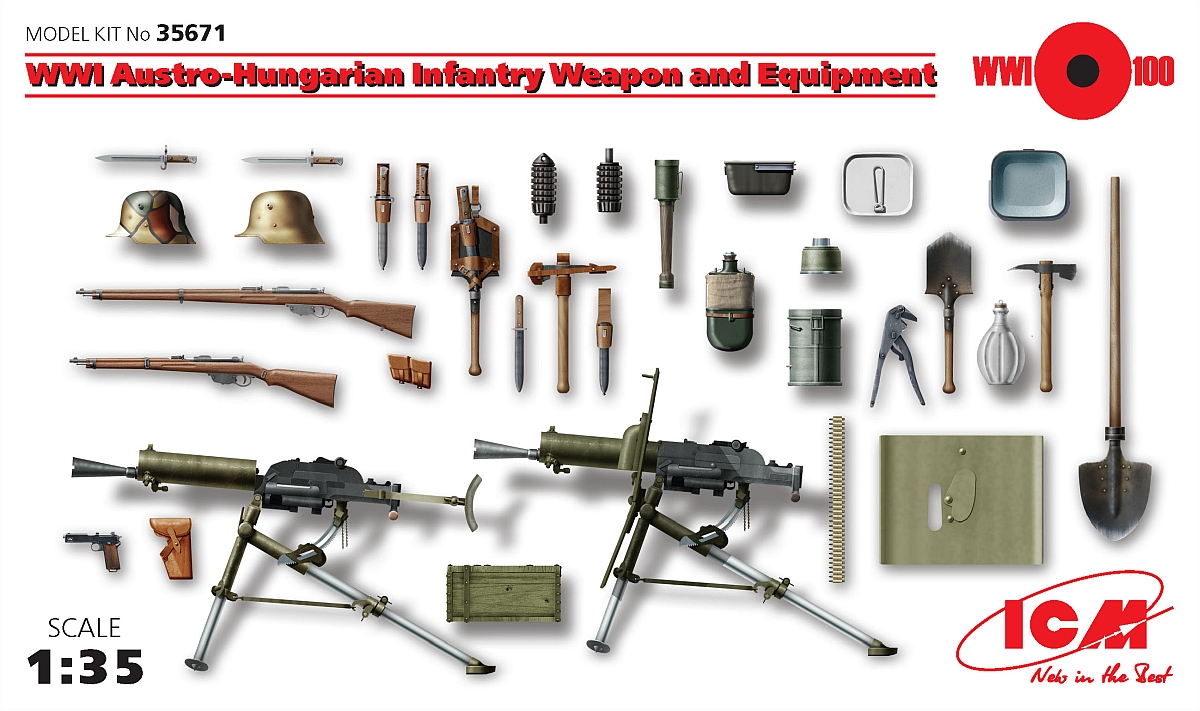 Another really necessary sets for the Great War and far beyond. Given the scarcity of documentation of the KuK arsenal, after all the Empire that fielded it hasn’t exactly been around ever since it went the way of the Dodo in the aftermath of the Great War, I had to do more research than usually, especially regarding it’s usability for the interbellum and the second round.

Spoiler: It fills a huge hole for the arsenals of many of the minor powers of World War II and thus is insanely useful beyond just representing the arsenal of a vanquished empire in Eastern Europe!

Before getting this started there is the by now usual disclaimer that it has the same beautiful level of crisp detail as all the other recent ICM gun (and figure for that matter) sets so I will only mention detail if it’s especially noteworthy for any reason.

Now join me on a trip into the weapons and equipment of a perished Empire! 😉 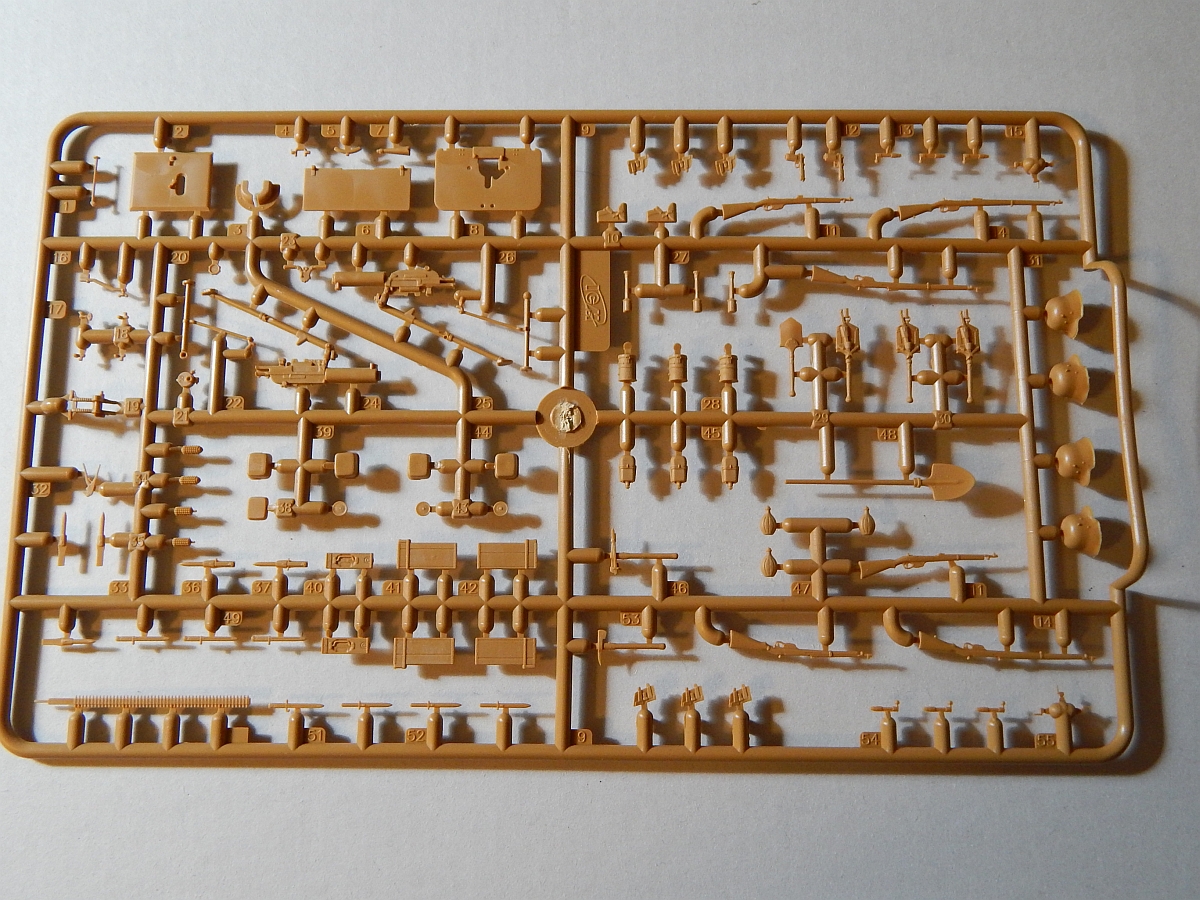 2x Schwarzlose Maschienengewehr M.7 or optionally M.7/12 – The difference is primarily in the receiver, the M.7/12 is a bit more boxy, while the M.7 has more fluent and elegant lines. This is the standard Maxim pattern heavy MG for the Austro-Hungarian forces through the early 20th century. It comes in the tripod mounted version and consist of a whopping 12 parts as well as another four parts for the optional armoured gun shield. It’s a substantial little kit on it’s own and also forms the core of the ICM 35697 “Austro-Hungarian MG team” set. Now this also is a very nice kit in itself but this MG really has … let’s say substantial further use. Schwarzlose M.7 and M.7/12 (mostly, but not exclusively the more modern ones) where used in the Great War timeframe by the Ottoman Empire and Sweden (in 6.5x55mm, externally at this scale the same) as well as (oh the irony) the Kingdom of Serbia and in the interbellum and Second World War by (let’s take a deep breath) Austria (of course), Germany (after the Anschluss), Albania, the Kingdom of Bulgaria, China (as really everything in the late 20s and early 30s), Colombia, Czechoslovakia (Successor State), the Kingdom of Greece, Hungary (same reason as Austria 😉 ), the Kingdom of Italy (primarily from reparations), the Netherlands, the Second Polish Republic, the Russian Empire (acquired a lot of these when Brusilov crushed the KuK forces in ’16), the State of Slovenes, Croats and Serbs and qua extensio of course the subsequent State of Yugoslavia as well as Jewish Partisans of the Hagana in the ’47-’48 Civil War in Mandatory Palestine. That’s it – used by almost no one eh?

6x Mannlicher M1895 Rifle. Oh boy, that’s another one of those… This is the refined version of Ferdinand Ritter von Mannlicher’s M1890 straight pull bolt action rifle, comes in three parts with a separate stacking lug and bolt. It used the 8x50mm Mannlicher cartridge in (now it gets slightly absurd) Mannlicher type clips (clips that contain their rounds in a magazine like set-up, really the opposite to the Mauser type stripper clip, think Garand clips in WW2 context). Used by everyone and their Grandma both in the antebellum, interbellum and Second World War (get ready…): Albania (4000 in 1911, more in reparations in the interbellum), Austria (until the Anschluss), the Kingdom of Bulgaria (bought directly in 1895), Czechoslovakia (Brno built a number until they changed to Mauser pattern rifles), the Sudeten German militia, Finnland (obtained some 2000 in the 1920s), Ethiopia, Germany (after the Anschluss they went mostly to police formations), the Kingdom of Greece, Hungary inherited it’s share, the Kingdom of Italy (captured and reparations, mainly used in Africa by colonial formations), Kenya, the Ottoman Empire (acquired as a cheaper alternative to it’s M1896 Mausers for second line and imperial formations), the Second Polish Republic (just as in Germany deployed by armed police formations), Portugal, Qing Dynasty, Spanish Republic and captured after the Civil War by Francoist Spain, the Kingdom of Romania (second line formations), the Russian Empire (acquired against KuK troops), the Kingdom of Serbia (captured in the Balkan Wars of 1912 and ’13), the State of Slovenes, Croats and Serbs and the subsequent State of Yugoslavia, Turkey (after the dissolution of the Ottoman Empire)… I think that’s even more than the Schwarzlose MG…

6x Enlisted pattern M1895 bayonet. A sensible knife pattern poking device. Has just a ring to fix it on the barrel.

2x Enlisted pattern M1895 bayonet in sheath with the frog.

4x Steyer M1912 automatic pistol. Also known as the Steyer-Hahn this was a stripper clip (8 rounds) fed pistol used by the Empire in 9mm Steyer and later in the Second World War by Germany in 9mm Parabellum. Looks surprisingly modern for a stripper clip fed pistol from 1912.

2x Entrenching tool bared, ready to be used digging into ground or foe.

6x Licence built German M1916 (at this scale it could well pass for a M1917) potato masher hand grenade.

4x Some sort of frag grenade. I’m being so vague because it has all the features of a M1915 timed fuse grenade…. aside from, oh, the stick hand grenade length wire handle.

4x M1916 Zeitzünder (“timed fuse”) rifle grenade. Should be affixed to a rifle because it lacks the barrel length rod it would display if not mounted.

Phew… that was… more intense research than I anticipated ;).

But given how many potential users this revealed to me and in consequence the extreme usefulness of this seeming obscure set I’d say it was worthwhile. 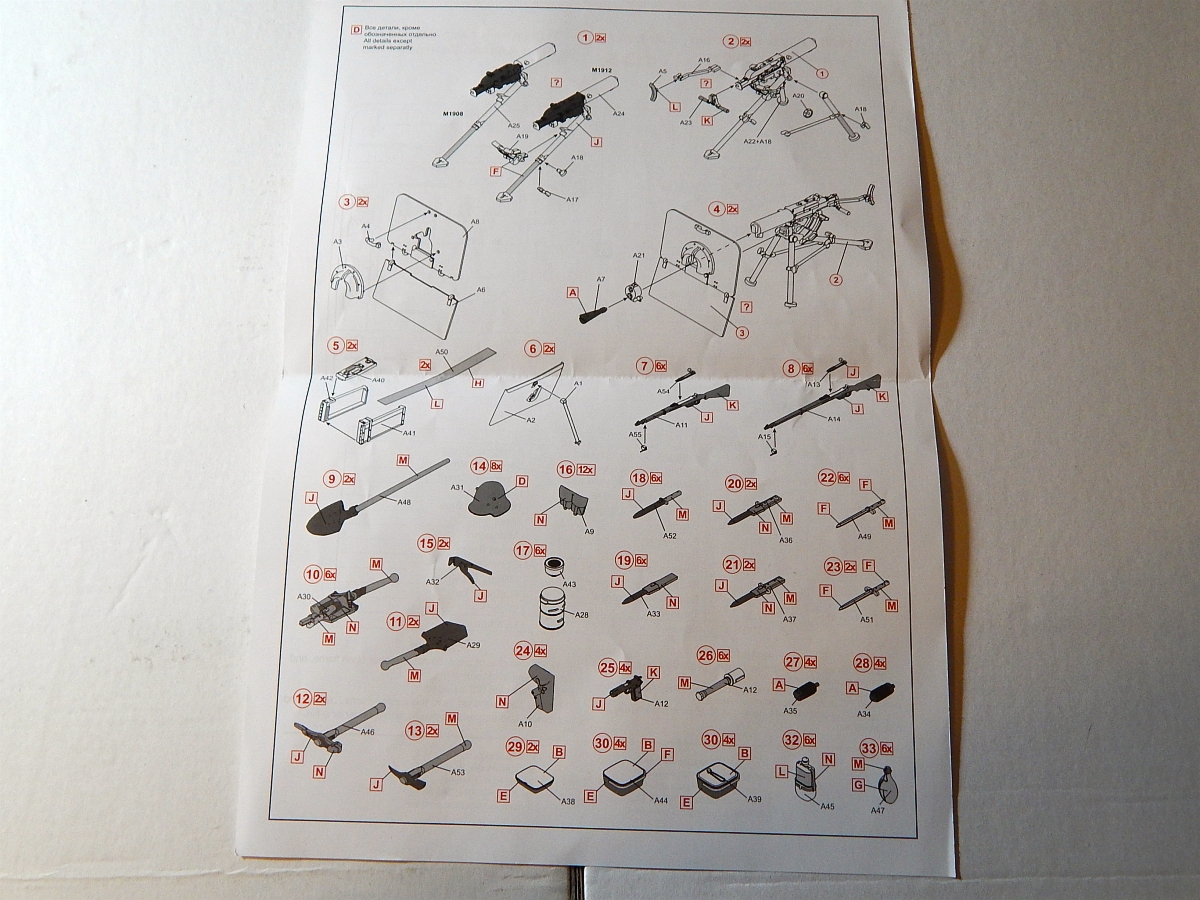 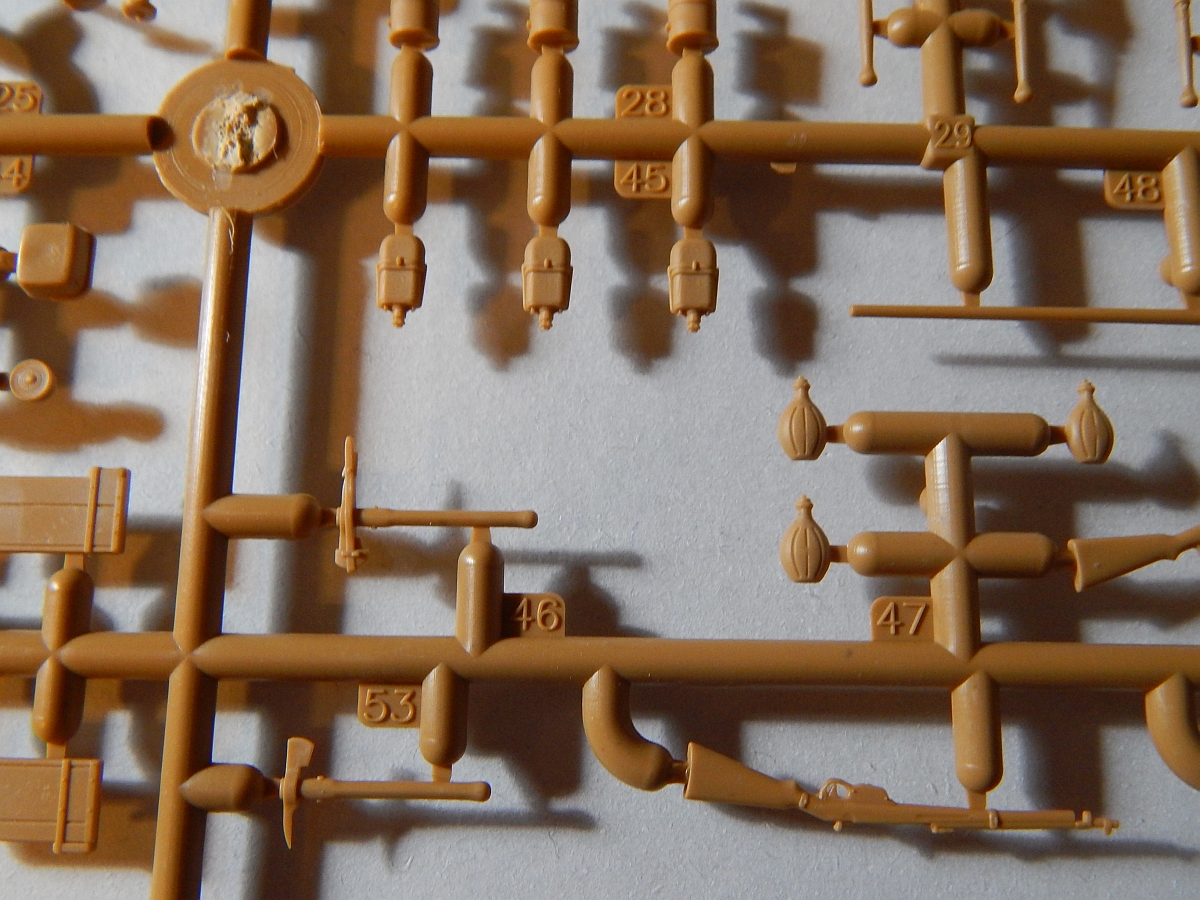 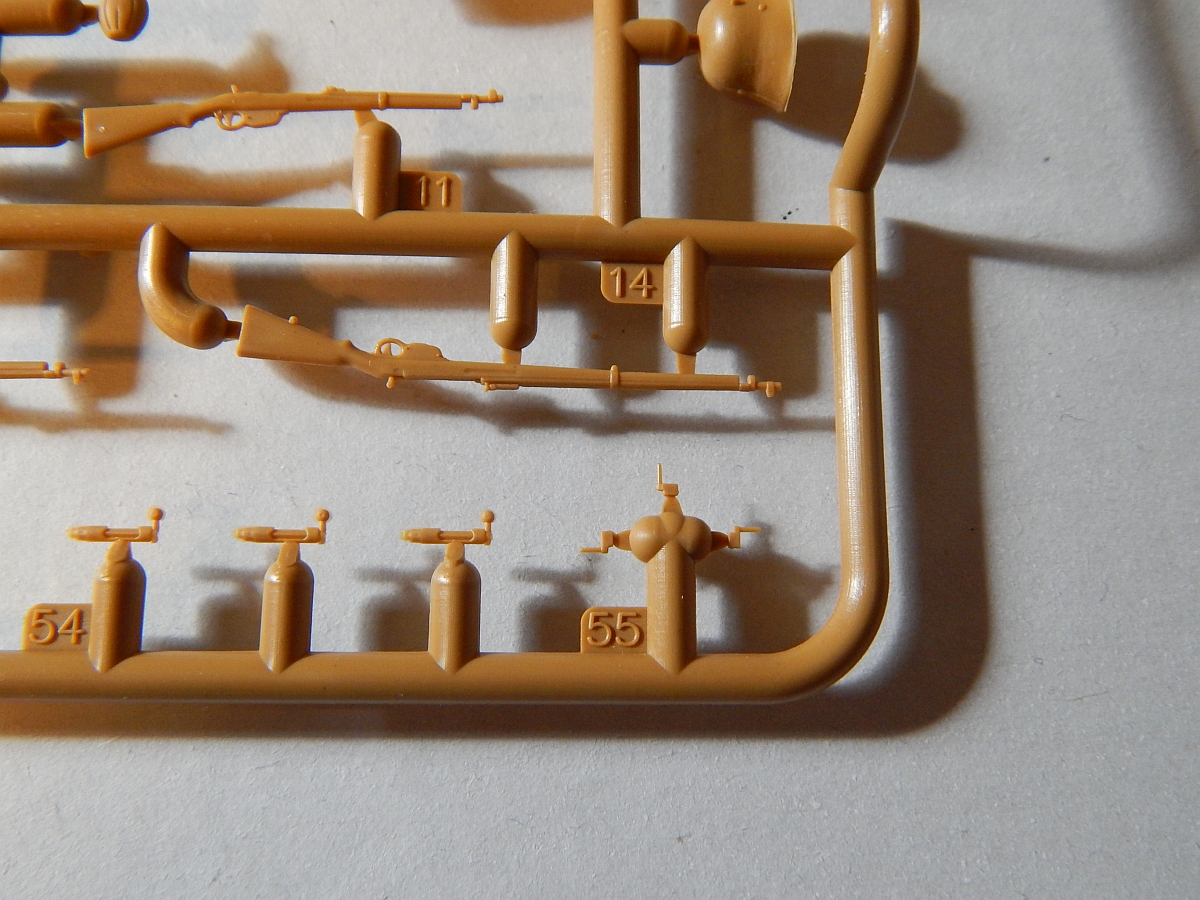 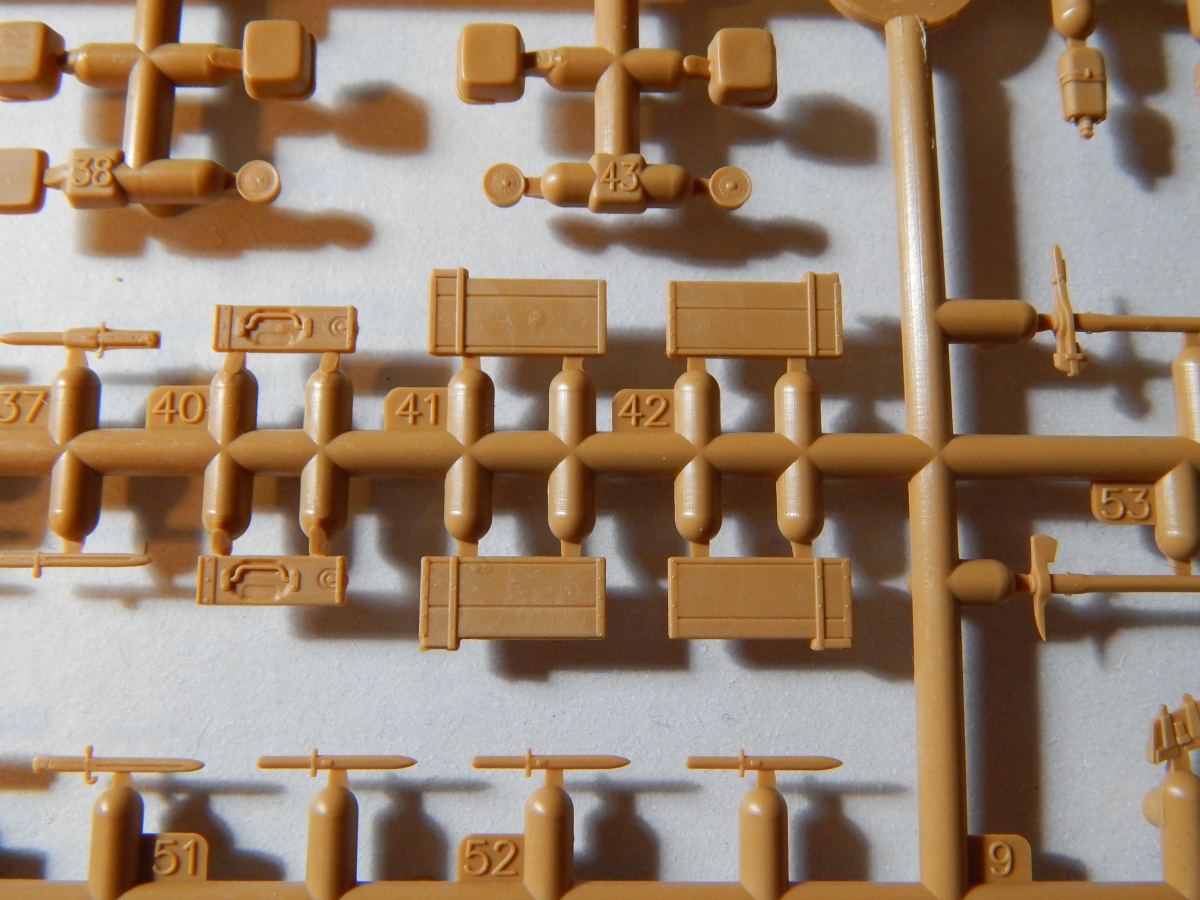 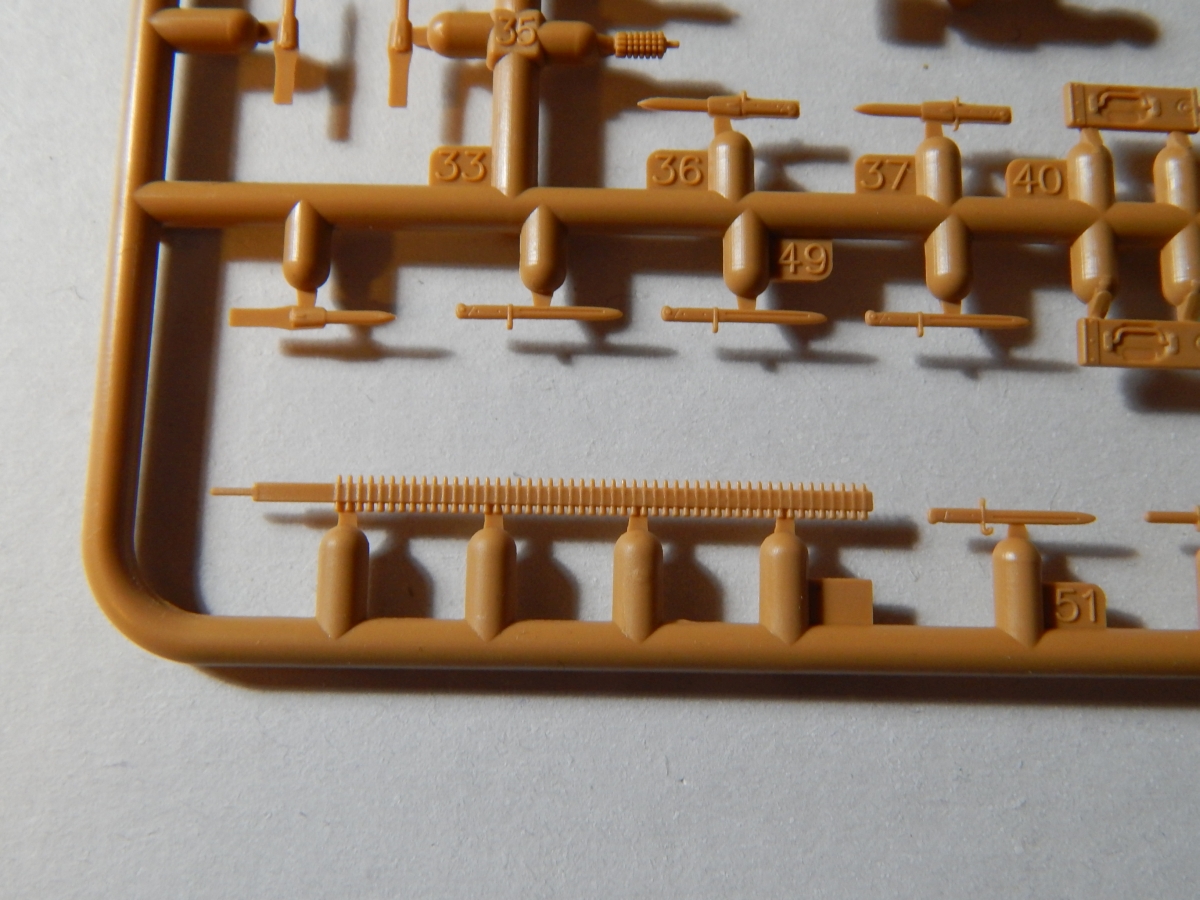 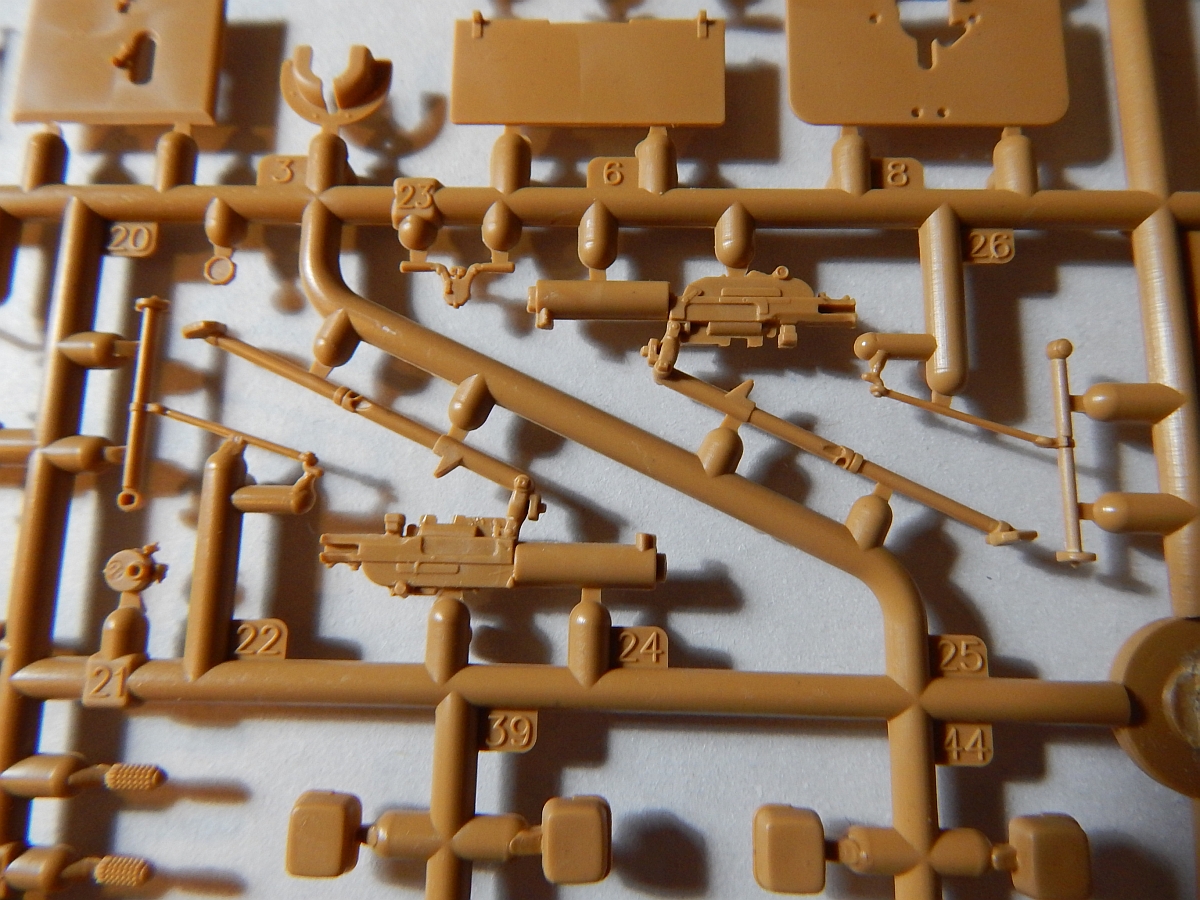 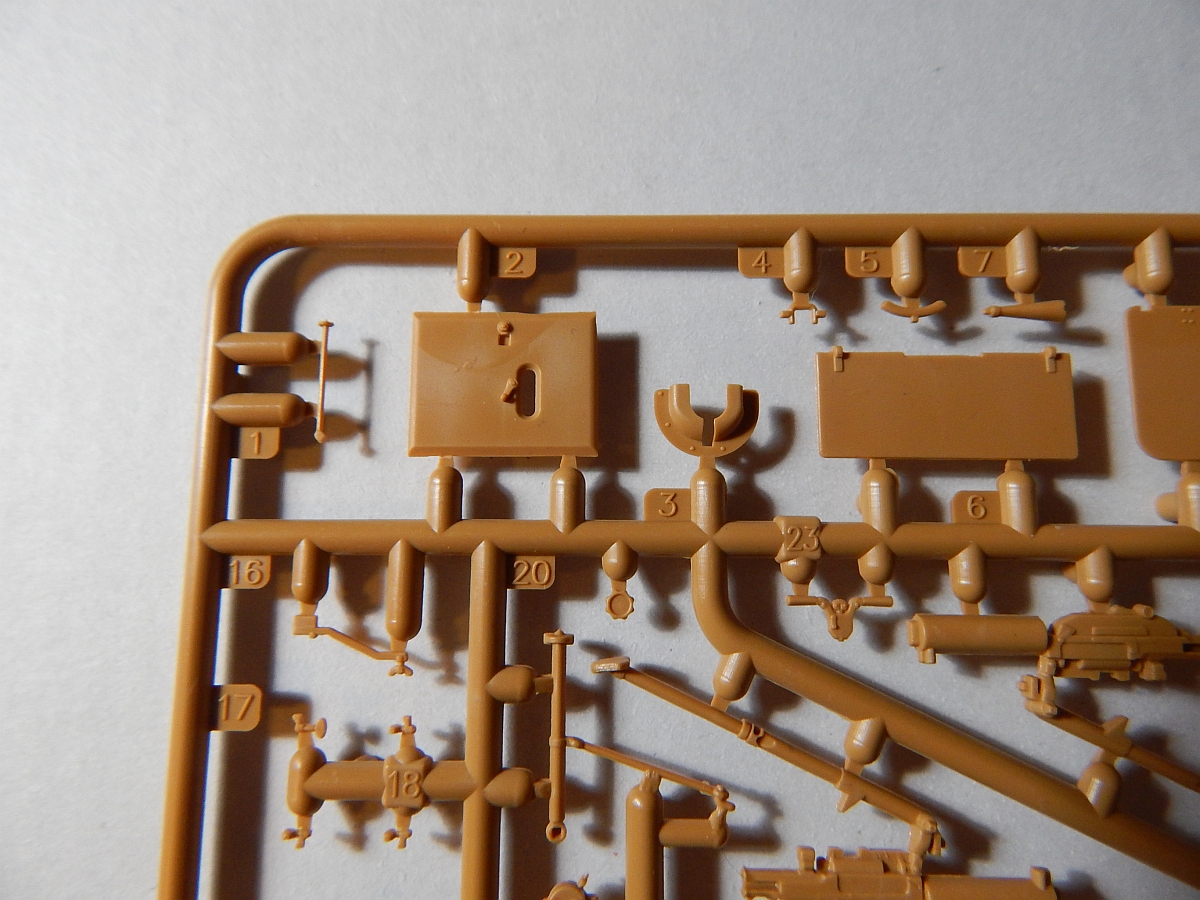 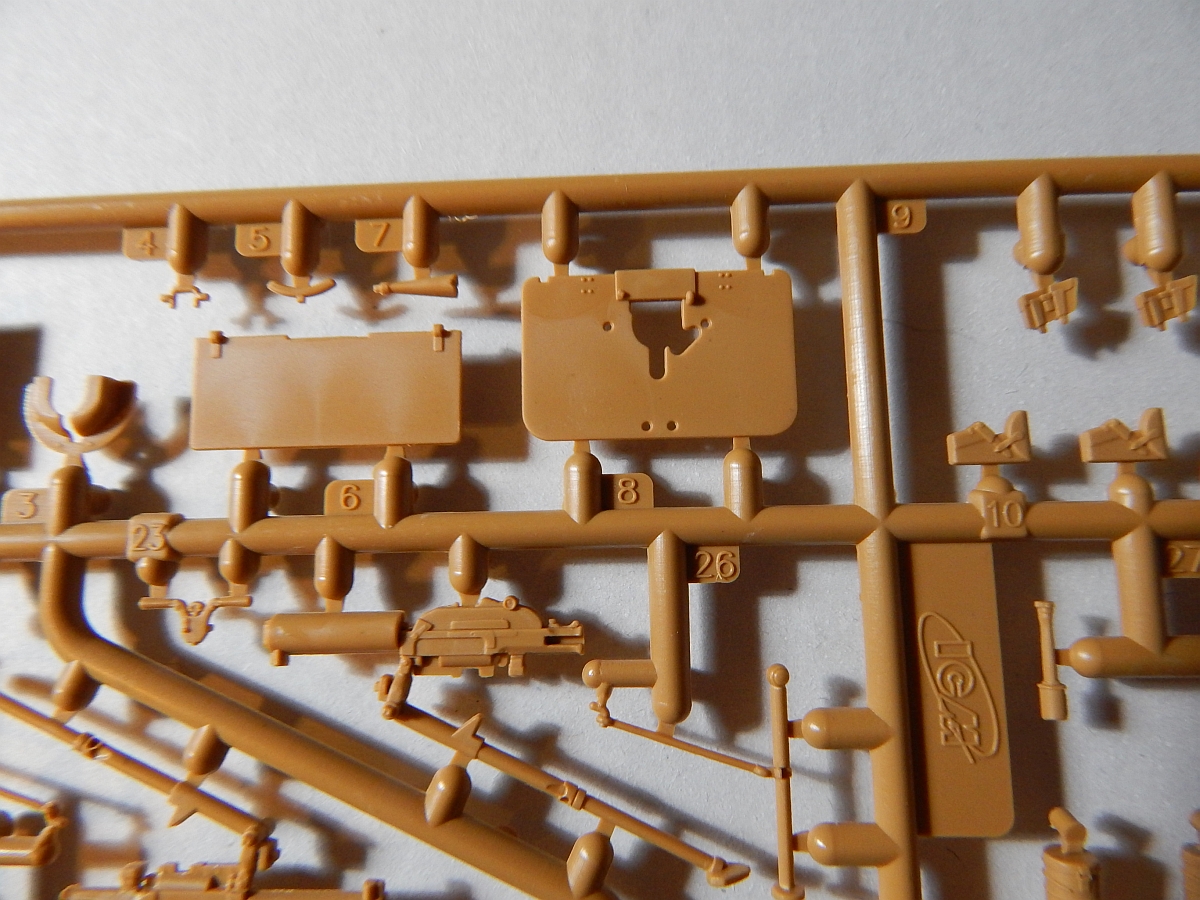 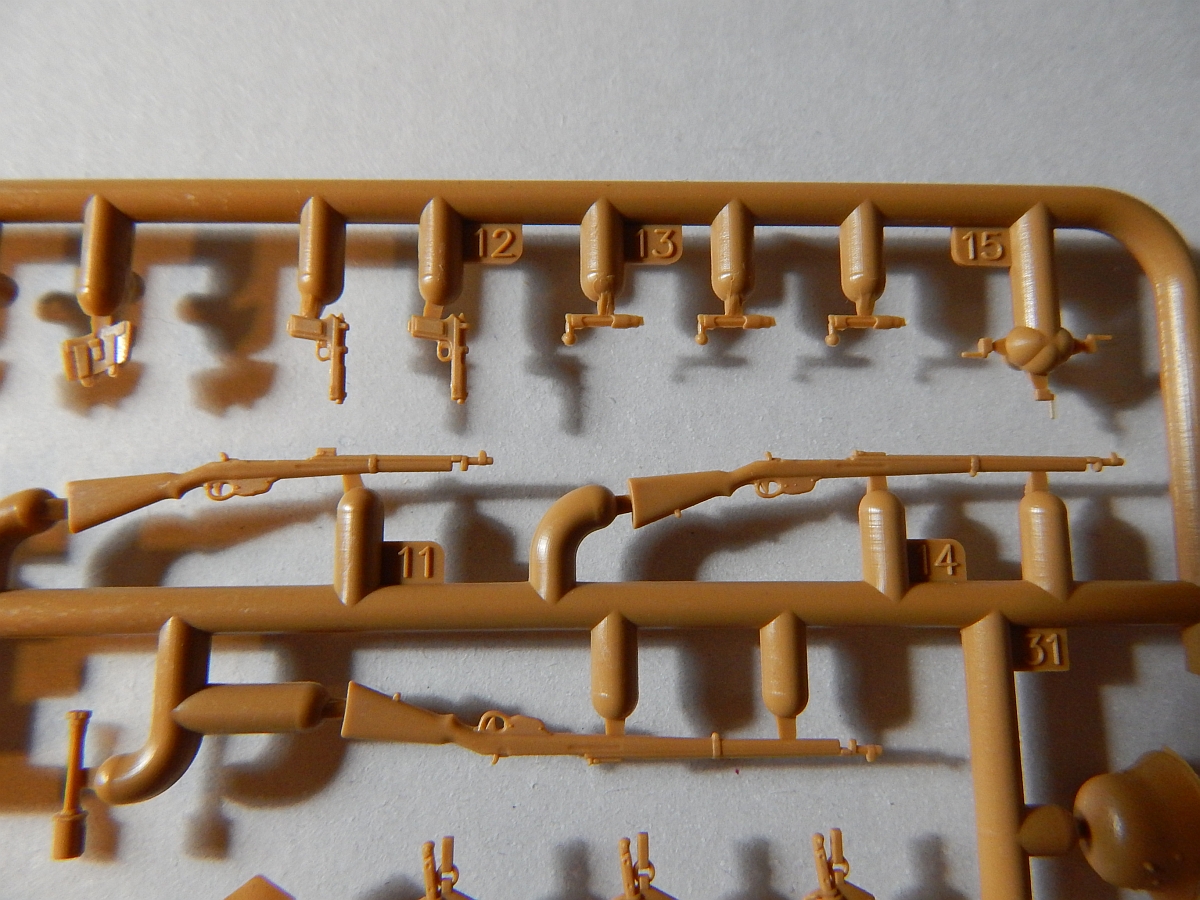