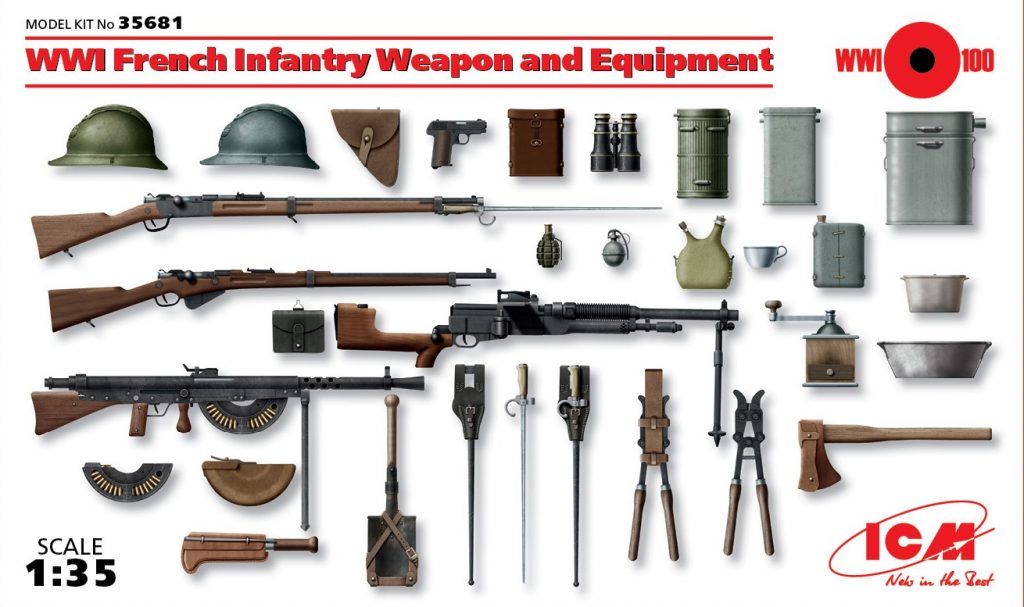 After something of a pause I return to my weapon set review, this time with ICM’s set of French guns and gear from the great war.

I just have to say that this is really one of the most necessary weapon sets for the Great War on the market, because, contrary to the WW2 tinged popular cultural perception France is really the Entente power that carried the fight all through the four years, suffering downright apocalyptic losses in the field at battles such as Verdun which dwarves everything WH40k imagines itself to provide in regards to battles and even had insane losses in the opening campaign when executing Plan XVII and consequently enduring the mind boggling level of loss of life an infantry dominated field engagement between European powers was certain to produce in the age of smokeless powder, repeating rifles, machine guns and quick-firing field pieces…

As usual I will list the contents and provide each item, when appropriate, with a little comment on the kit’s quality and historical context on deployment and use if sufficiently interesting (there probably wont be a comment on the use of pressed steel cups e.g.

6x Lebel Mle1886 M93 rifle with Épée-Baïonnette Modèle 1886 (a straight point-only bayonet with a x-shaped cross section) fixed – The smokeless powder rifle, the first to introduce this improvement to the world, already somewhat obsolete at this point having had only minor improvement across the past 30 years such as the bolt modification in 1893 and a change to spitzer rounds which wasn’t entirely without problems having to operate with a 8-round tube magazine (given the time it was introduces, it, of course, also had a magazine cut-off…). Both the gun and the moulded on bayonet are beautifully modelled and it comes with a separate bolt handle for increased detail

18x Lebel ammunition pouches – these where supremely archaic pouches, just a leather box with cartridges floating around in it as they had in the past 300 years.

3x Berthier Mle1916 rifle – the, somewhat, successor of the Lebel, initially introduced for cavalry and colonial troops in diverse carbine and differing length rifle versions the Mle1916 was a regular rifle length version with the three round Mannlicher type clip replaced by a more appropriate 5 round version. Could use the Épée-Baïonnette Modèle 1886 and also comes with a separately moulded bolt handle and I will. from here on out I’ll just make a reference to the moulding quality if there’s a slip-up of the beautiful execution

2x Hotchkiss Mle1909 light machine gun – more correctly the Hotchkiss M1909 Benét–Mercié. It’s a weird inclusion here really because, in contrast to the Hotchkiss Mle1914 which was the standard French infantry MG of the war, this is an almost “fortress exclusive” design. Of course it saw combat at the pivotal 9-month attritional assault on the fortresses around Verdun and was mounted in some tanks and planes, but overall a rather obscure weapon. Comes with a 2/3rds fired 30-round strip mounted on top and moulded separately as well as a folded up and a deployed bi-pod.

2x Chauchat CSRG Mle1915 machine gun – More correctly and appropriately an automatic rifle (Fusil Mitrailleur Modele 1915 CSRG) to be carried by a single soldier on the assault providing suppression fire from the hip, this weird-looking gun has an undeservedly bad reputation, primarily because arriving American troops where supplied with a .30-06 version that really, really, really did not work with the Springfield ammo and jammed on something like every third round. Comes with a bi-pod in folded up and deployed versions.

2x Lebel M1892 Revolver – A rather generic military revolver form the era immediately preceding the adoption automatic pistols into military service, it’s a solid frame side swinging revolver in 8mm Lebel which was a rather suspiciously weak pistol round, barely equivalent to a weak load on a .32ACP.

) in roughly 50 minor variations (most of no consequence at this scale) totalling something between 800.000 and a million, excluding inter-bellum production, unlicensed production and not counting the original John Moses Browning M1903, this was the French military side-arm until the early 50s.

6x F-1 hand-grenade – fairly standard egg shaped splinter grenade introduced in 1915. Actually the Fusante №1 is the generic hand-grenade, bought and copied by a lot countries during the war and in the inter-bellum until the defeat of France in 1940 and still not all that different from a lot of modern hand-grenades.

2x Wire cutters – of course once the war had turned into a large scale siege this was one of the most important implements,

2x Small shovel in case – sadly no spade without case is included, as it was the multi-tool of this war, useful for anything from entrenching tool in to battle axe, impürovised MG position armour and everything in between.

6x M2 respirator canister – canister for the M2 gas mask introduced in early 1916 and a production of roughly 25.000.000 it was used by all Entente powers.

8x Adrian M1915 Steel Helmet – Iconic French helmet of the World Wars with the flaming grenade of the infantry; about as iconic as the other two WW1 steel helmets